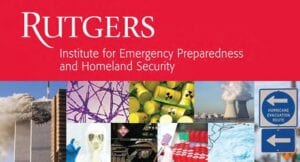 The Rutgers Institute for Emergency Preparedness and Homeland Security (IEPHS) encompasses new and established programs at the university that aim to protect people and property in the event of manmade or natural emergencies. It will promote collaborations among Rutgers experts across all locations across disciplines.

“Rutgers established the institute to play a leadership role, nationally and internationally, in the fields of emergency preparedness, disaster response and homeland security,” said Clifton R. Lacy, a physician and the institute’s director. “It brings together experts from the broad spectrum of disciplines that exist at Rutgers University – to forge collaborations among those professionals and between Rutgers faculty and entities in the public and private sectors.”

The new institute will collaborate with several Rutgers-led federally funded research efforts, including the Department of Homeland Security center of excellence for Command, Control, and Interoperability Center for Advanced Data Analysis (CCICADA); and a National Institutes of Health center of excellence that develops drugs to counter chemical terrorism, called CounterACT. Rutgers also is home to the Center for Environmental Exposures and Disease (CEED) and the Center for Exposure and Risk Modeling (CERM).

“For the next generation of homeland security professionals, multidisciplined public-private collaboration must be a part of your DNA,” said Tom Ridge, to the audience of more than 450 stakeholders in emergency preparedness, disaster response and homeland security.

Presentation topics included research into treatment for poison gas attacks and accidents, protection of homes and highways from the ravages of storms and protecting cloud-based computing services from intrusions by cyber criminals.

The conference also featured an address by New Jersey Acting Attorney General John Jay Hoffman, who called the institute a necessary component in the state’s emergency preparedness. He emphasized the need to share knowledge as widely as possible among New Jersey’s communities.

A Treaty to Break the Pandemic Cycle: Don’t Ignore Key Lessons from the Past Two Years