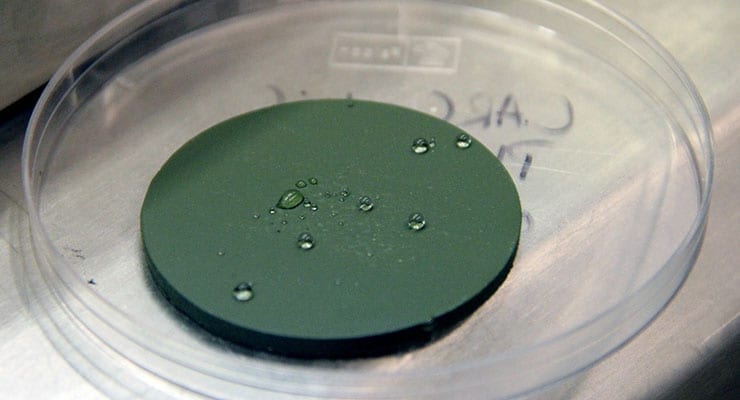 Commercial Polyurethane paint is used on all military assets such as tanks. While it works to keep warfighters’ materials safe, researchers at the U.S. Army Edgewood Chemical Biological Center (ECBC) are looking to enhance the performance of paint to protect against additional threats.

To enhance the performance of the paint, ECBC used a plasma-enhanced method previously used to improve water resistance, which could increase the capabilities of protective coating used on equipment under a program funded by the Defense Threat Reduction Agency Joint Science and Technology Office.

The ECBC team of Greg Peterson, Wesley Gordon and Erin Durke treated Polyurethane panels with perfluoroalkanes using a unique plasma chemical vapor deposition technique. The treated panel showed a 90 percent increased effectiveness through minimizing the spread of harmful chemicals into additional paint layers. This demonstrates promise for use as a future paint material.

“Ideally, the Defense Community is looking to create a surface, analogous to Teflon, permitting easy removal of contaminants,” Durke said. “A chemical like a CWA or motor oil, could just be wiped off without penetrating the surface.”

The plasma process breaks apart perfluoroalkane molecules, which then deposit Carbon Fluorine-type functional groups that make the treated surface unreactive. Contaminants are then pinned to the surface, as opposed to absorbing into the paint, making decontamination significantly easier. Several agencies are currently exploring this plasma-enhancement for clothing decontamination. ECBC has been researching its uses since 2012.

According to the team’s published paper on the experiment, the improved performance of the plasma-enhanced method could be a result of changing the coating’s surface-free energy via fluorine incorporation, or possibly due to effects from surface morphology changes.

In the future, researchers hope to look at different types of precursors, deposition times of the plasma, and other methods that could enhance its effectiveness.

“While reducing agent absorption by 90 percent is a great start, we want to do better than that,” Peterson said. “That 10 percent could still be extremely harmful, so we want to continue to improve this method.”

The researchers also want to scale-up the product to be industrially applicable so that it can be used to modify and improve assets that are already out in the field.