The State of Tuberculosis in Europe 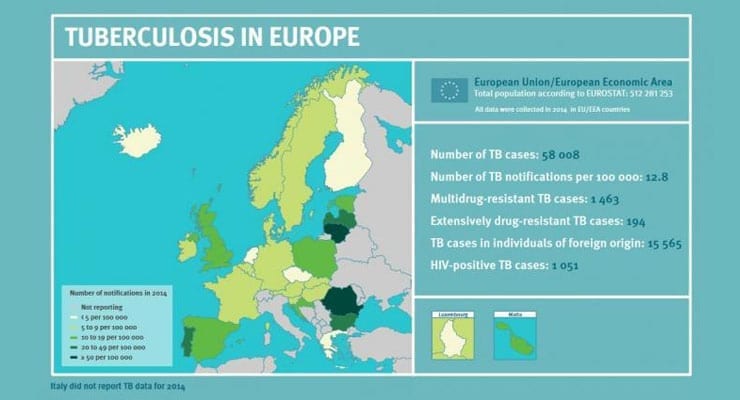 An estimated 340,000 Europeans developed tuberculosis (TB) in 2014, according to new data released by the European Centre for Disease Prevention and Control (ECDC) and WHO/Europe.

With new TB cases decreasing by 4.3% on average between 2010 and 2014, the WHO European Region has met the Millennium Development Goal target of reversing the incidence of TB by 2015. However, high rates of multidrug-resistant (MDR) TB and TB affecting vulnerable populations, such as the homeless, drug and alcohol abusers and migrants from countries with high numbers of cases TB continue to challenge TB elimination.

“Social circumstances or lifestyles may make it more difficult for some people to recognize the symptoms of TB, access healthcare services, follow a treatment or attend regular healthcare appointments. We need to think about tailored interventions for such vulnerable people, which can include outreach teams or directly observed treatment”, says ECDC Acting Director Dr. Andrea Ammon.

“In the EU/EEA, the number of new TB cases decreases only slowly by around 5% each year. And if TB is not successfully tackled in vulnerable groups, it will not be eliminated as planned. This is why ECDC releases scientific advice to support countries in reaching poor and marginalized populations that are particularly vulnerable to TB”.

“One quarter of all 480,000 patients sick with MDR TB globally were in the European Region in 2014. This alarmingly high number is a major challenge for TB control”, says Dr. Zsuzsanna Jakab, WHO Regional Director for Europe. “The most vulnerable groups, including poor and marginalized populations and migrants and refugees, are at greater risk of developing MDR TB. Because of their living conditions, TB is often diagnosed late, and it is harder for them to complete a treatment course. If we really want to eliminate TB from Europe, no one must be left behind. This is in line with the framework of Health 2020 and the global agenda of the Sustainable Development Goals”.

The risk of being infected or developing TB disease depends on several factors including TB rates in the country of origin. New TB cases in some origin countries are lower than the European Region’s average. In Syria, for example, new TB cases are 17 per 100,000 population, which is less than half than the European Region’s average (37) and not much higher than the EU/EEA average (12). In addition, as TB is not easily transmissible and contacts are limited, there is a low risk that migrants transmit the disease to the resident population.

WHO recommends that TB screening is targeted to those most at risk. Among refugees and migrants it is people coming from countries with a high number of new TB cases or who have been living or travelling in precarious situations and have possibly been exposed to TB infection.

The recently published Systematic screening for active tuberculosis: an operational guide provides guidance on how to target and tailor TB screening, as this allows to detect active disease and to provide immediate treatment, thus breaking possible transmission among the refugees and their close contacts.