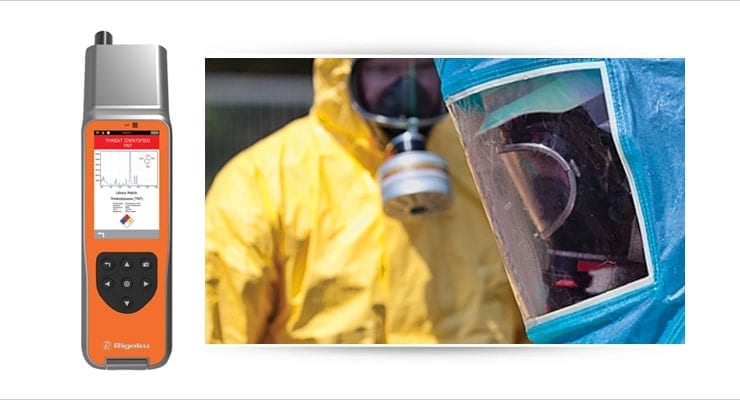 The new feature, dubbed 4C Technology, significantly increases the usefulness of a handheld analyzer used at incidents by indicating the overall threat level posed by the presence of multiple individual chemicals. Although these chemicals may not be a threat individually, their combined presence could indicate the preparation of hazardous or illicit compounds.

By integrating Rigaku’s new 4C Technology, Progeny ResQ is the first handheld Raman analyzer to automatically monitor individual chemical results against its own on-board advanced search algorithms. A visual, on-screen warning will alert the user when a combination of a potential illicit or hazardous threat is determined.

When using Progeny ResQ’s new 4C mode, users can specify the warning window (measured in hours or number of scans) to detect and identify precursors, then indicate their potential threat combination.

“With the use of 4C Technology, first responders can now assess an entire scene faster with the power to foresee a potential greater threat,” said Bree Allen, president of Rigaku Analytical Devices. “This will expedite a more appropriate response.”

With Progeny ResQ’s new 4C threat alert and its on-board camera, the ability to monitor, respond and document an incident utilizing a single handheld chemical identification device is now possible.

Rigaku’s 4C functionality now comes standard on new Progeny ResQ units, plus it can be downloaded for free and easily uploaded to the unit by existing users.