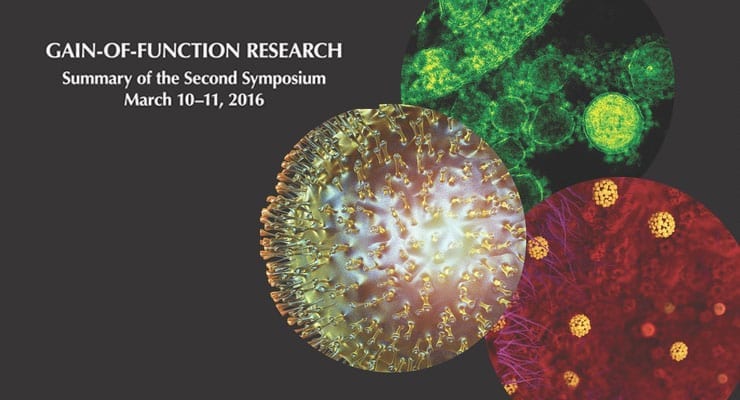 Research involving pathogens provides insight into the fundamental nature of human-pathogen interactions, enables the assessment of the pandemic potential of emerging infectious agents, and informs public health and preparedness efforts, including the development of medical countermeasures.

In the wake of a number of biosafety incidents in recent years at Federal facilities, concerns have been raised about certain “gain-of-function” (GOF) studies with the potential to generate pathogens with enhanced pathogenicity or transmissibility in mammals. The concerns center around whether a pathogen with enhanced characteristics could be accidentally or intentionally released from a laboratory, potentially exposing surrounding populations to a pathogen with pandemic potential.

As part of federal efforts to improve biosecurity oversight, the National Academies of Sciences, Engineering, and Medicine held a public symposium in March 2016 on potential U.S. government policies for the oversight of GOF research.

A formal summary of this meeting was published this week by the National Academies Press.

This was the Academies’ second meeting held at the request of the U.S. government to provide a mechanism to engage the life sciences community and the broader public and solicit feedback on optimal approaches to ensure effective federal oversight of GOF research as part of a broader U.S. government deliberative process.

The event focused on discussion of the draft recommendations regarding GOF research of the National Science Advisory Board for Biosecurity’s (NSABB’s) Working Group. The recommendations are contained in a draft paper, which was released in December 2015. It also included discussion of a formal risk and benefit assessment (RBA) commissioned to inform the NSABB’s work and sessions devoted to current U.S. policy.

The public symposium did not attempt to develop consensus recommendations, but rather sought individual perspectives and robust discussion to inform the development of the NSABB’s final recommendations.

Approximately 125 people attended the event in person, while more than 200 others watched the webcast, which is still available for public viewing.

This activity was supported by Contract No. HHSN263201200074 between the National Academy of Sciences and the National Institutes of Health, by the John D. and Catherine T. MacArthur Foundation, and by the Wellcome Trust.