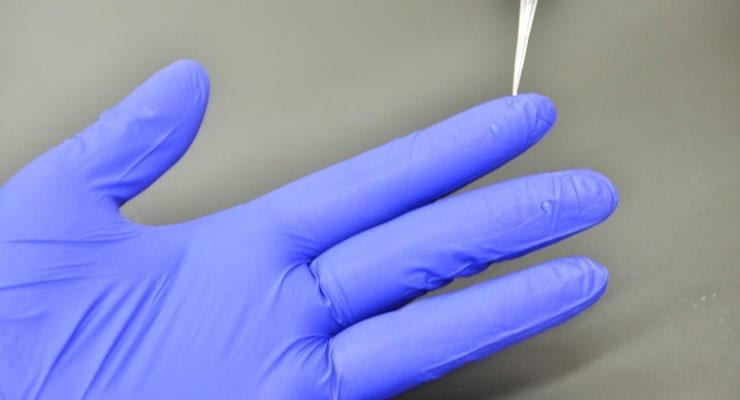 “Infection control is a priority for all hospitals to reduce the spread of HCAIs,” said study author Sae Otani, a master course student at Bunkyo Gakuin University, “Gloving is recommended as a barrier protection for healthcare workers to reduce the risk of contamination during contact with infectious sputum, urine and body fluids,” she said. “However, failure to change or remove contaminated gloves carries a high-risk of healthcare-associated pathogens transmission.”

The research team, led by Sae Otani, and Kazue Fujita, Nippon Medical School used common healthcare-associated pathogens in this study. Nitrile examination gloves were inoculated with the specific microorganism. After inoculation of bacteria, contaminated gloves were touched to a sterilized polypropylene surface. Then, the number of viable bacteria on the polypropylene surface was quantified.

“This study shows that contaminated gloves increase risks of cross-transmission of healthcare-associated pathogens among healthcare workers and in the environment,” said Ms. Otani.

In addition, the data also suggest that types of bacteria may affect cross-transmission rates among contaminated gloves and the hospital surfaces. A. baumannii are higher risk of transmission from the gloves to hospital surfaces than E. coli, K. pneumoniae and P. aeruginosa in this study. HCAIs caused by gram-negative organisms such as Acinetobacter spp., P. aeruginosa and Enterobacteriaceae are a major concern.

“Proper glove use may decrease the risk of healthcare-associated infections and gloves should be carefully used and removed after use depending on the types of bacteria,” said Ms. Otani.

Looking Back at the Biological Threat Reduction Program Through the Decades

New Reusable Fabric Can Deactivate Both Biological and Chemical Threats

Preparing for a Future Pandemic with Artificial Intelligence

Looking Back at the Biological Threat Reduction Program Through the Decades