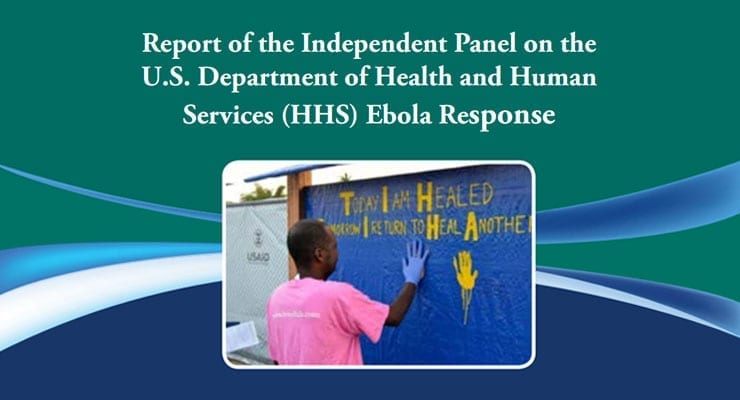 In a report released today by the U.S. Department of Health and Human Services (HHS), an Independent Panel formed to review HHS’s response to Ebola made several recommendations on how the nation’s federal public health system should strengthen its response to major public health threats, both internationally and domestically.

The report calls for increased coordination both within HHS and across all involved federal agencies. It also recommends strengthened coordination and collaboration with state and local governments and their private-sector partners.

The panel’s recommendations emphasize the critical need for constant focus and ongoing funding for preparedness and response necessary to change systems and policy if the U.S. is to be sufficiently prepared for public health crises.

More than 11,000 people lost their lives during the Ebola outbreak of 2014-2016. But without the unstinting commitment of many HHS employees and international partners who fought tirelessly to help affected West African nations identify and contain this epidemic, many more lives would have been lost and the risk of dissemination outside that region greatly increased. We are grateful for their bravery and sacrifice. Yet it’s critical that we better prepare our nation for the ever-looming threats to the health of our U.S. and global communities,” said Dr. Jonathan Fielding, Distinguished Professor at UCLA, who chaired the Independent Panel. “Without focused and sustained effort, the result of other novel public health threats could be much more devastating.”

The Independent Panel, comprised of public health, healthcare, emergency response, and communication experts, convened in July 2015 at the invitation of HHS Secretary Sylvia Mathews Burwell. Charged with capturing critical lessons learned from HHS’ response to Ebola, the panel’s review included a survey of over 1,100 HHS staff involved in the international and domestic response and interviews with more than 200 individuals representing local, state and federal agencies, including HHS, and key private and independent sector organizations involved in responding to Ebola.

The panel also reviewed situation reports, leadership briefs and after-action reports from HHS and other federal agencies, and reconstructed a timeline of milestones and key activities throughout the response.

There are important lessons learned from Ebola that can improve our current response to Zika and preparedness for the next global communicable disease threats,” said Dr. Fielding. “I share other panel members’ concern that Congress is requiring money be taken from continuing efforts needed to strengthen public health preparedness and the fight against Ebola–to be used instead for fighting Zika. We believe this would increase our vulnerability to a resurgence of Ebola and retard efforts critical for longer term preparedness.”

The report’s Key Findings focus on these primary areas of concern:

Former President of CARE, panel member Dr. Helene Gayle stated, “Despite heroic efforts to combat the Ebola crisis, there is much to be done to be prepared for current and future threats to public health. We cannot continue to treat each health threat as a one off event or balance one against the other. We need comprehensive preparedness planning and consistent federal funding. Resources and action in a coordinated way are critical now and in the future if we are going to avoid the preventable loss of lives and human suffering here in the U.S. and around the globe.”

Accompanying the release of the independent panel’s report, HHS is providing a detailed Ebola Response Improvement Plan. Speaking on behalf of all panel members, Dr. Fielding stated, “Since the panel’s work began 11 months ago, HHS has been taking specific actions to strengthen its response. We want to acknowledge and commend the progress made, but more must be done. We request HHS issue progress reports to the public on a regular basis.”

Read more: Report of the Independent Panel on the U.S. Department of Health and Human Services (HHS) Ebola Response (.pdf)