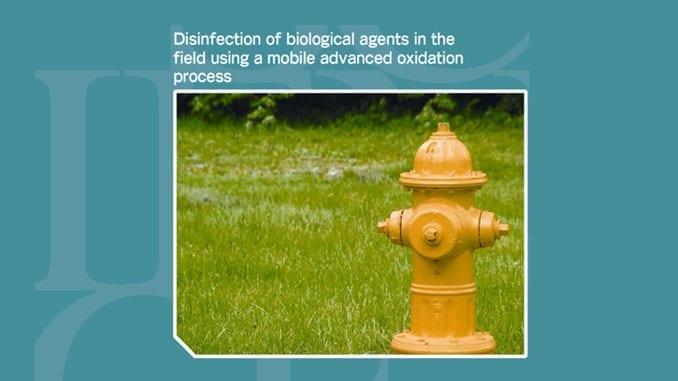 Ozone and UV light are powerful disinfectants on their own, but when ozone is exposed to UV light, hydrogen peroxide and hydroxyl radicals are formed, both of which are also potent disinfectants. The in situ production of a potent oxidizer such as the hydroxyl radical at concentrations strong enough to disinfect water is known as an advanced oxidative process (AOP).

The U.S. Environmental Protection Agency (EPA), through its Office of Research and Development’s National Homeland Security Research Center (NHSRC), this week published a new study of disinfection of biological agents in the field using a mobile advanced oxidation process.

The project examined the inactivation and removal of biological contaminants in dirty wash water using a portable ozone-UV AOP process, in support of the U.S. Army’s Net Zero Initiative is an energy-conservation program that focuses on energy as well as water and waste usage procedures.

One area of interest is treating and potentially reusing the large volumes of wash water used to clean military vehicles. Wash racks generate waste water contaminated with oil, grease, some metals and mixtures of suspended solids such as dirt and mud. Reusing wash rack water can be difficult due to the contamination, but reuse would become even more difficult if disinfection of biological contaminants were needed.

Biological contamination could come from sources such as untreated sewage if, for example, a military vehicle was near an open sewer during combat or exercises, or from deliberate contamination with a biological warfare agent while in theater.

In theater, immediate access to chemical disinfectants such as chlorine bleach or chloride dioxide may not be available. Furthermore, transport of large amounts of such chemicals could prove impractical or hazardous. In situations where chemical disinfection is impracticable, disinfection technologies such as ultraviolet light and ozone are favorable since they do not need chemicals or reagent, and power can be supplied by a mobile generator.

The strain of E. coli used in these experiments is not a biological warfare agent, but acts as a surrogate for certain of the vegetative biological agents such as the enterohemorrhagic strain designated E. coli 0157:H7.

Data from these experiments will help decision makers in the Army determine capabilities to reuse wash rack water, and inform a scenario in which wide area biological contamination event occurs, and dirty water must be disinfected before being disposed of in a sewer.

Read the report: Disinfection of biological agents in the field using a mobile advanced oxidation process.