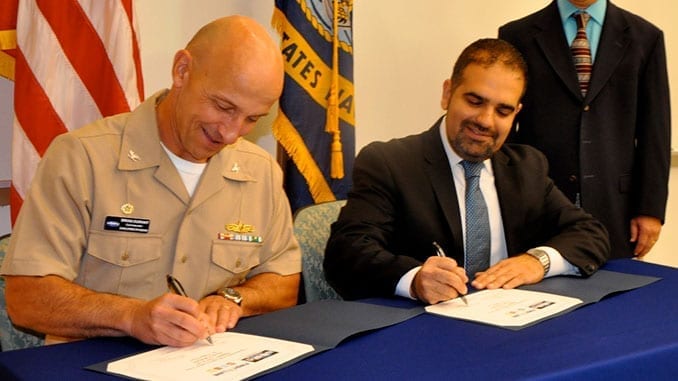 The U.S. Navy signed an exclusive license agreement with First Line Technology on Sept. 7 for the manufacture of a lifesaving decontamination technology.

NSWCDD researchers worked for more than a decade to develop and test the technology and worked closely with First Line Technology to develop a transition plan for bringing the decon solution to U.S. first responders to help protect the general public from hazardous threats.

“The fact that we’ve been able to partner with industry and actually get this out beyond what Dahlgren would be able to do on our own is a huge step forward for the Navy, DoD, and our nation,” said Capt. Brian Durant, NSWCDD commanding officer at the commemorative license signing ceremony held on the University of Mary Washington’s Dahlgren campus.

According to NSWCDD, Dahlgren Decon has demonstrated itself to be the most effective decontamination technology against chemical and biological agents, and the fastest reacting when compared to other commercial products on the market or in development.

The team ensured that the peroxygen-based chemical and biological decontamination formulation is also friendly to equipment, users, and the environment without sacrificing speed and efficacy.

The current U.S. military decontamination solutions – Decon Formulation 200 (DF 200) and High Test Hypochlorite (HTH) – are effective. However, HTH is highly corrosive to equipment while DF200 requires contact times as long as 30 minutes. Both solutions contain components that are harsh on equipment, users, and the environment.

Dahlgren Decon minimizes those issues while maintaining high efficacy against a wide panel of chemical and biological threats.

“The solution is easy to use,” Hodge points out. “The active ingredient ships as an easy-to-handle solid and stores wells. Activation is fast – just add water. The active solution’s peracid oxidizers tackle an array of targets in minutes without solvents and without sacrificing useable life once mixed.”

“A lot of inventors from the Dahlgren side made a powerful decontaminant and now it’s just a matter of getting it out to the market,” said Amit Kapoor, president of First Line Technology, LLC, after signing the exclusive license agreement.  “We want to bridge the gap and take it out to the first responders and help the warfighter, ensuring they have the best of the best.”