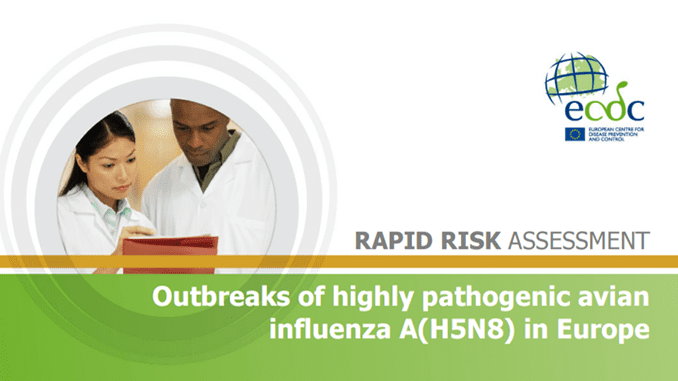 The European Centre for Disease Prevention and Control (ECDC) has published an updated assessment of the risk to humans from highly pathogenic avian influenza (HPAI) A(H5N8) viruses.

This year Hungary, Austria, Germany, Croatia, Denmark, The Netherlands, Poland and Switzerland have reported A(H5N8) viruses in either wild birds, zoo birds or poultry holdings. Outside of Europe, India and Israel are currently reporting outbreaks in birds while South Korea, Taiwan and the Russian Federation reported outbreaks earlier this year.

This is the second time this virus has been introduced into Europe via the autumn migration of wild birds, although A(H5N8) has been circulating continuously in Asia since 2010.

According to ECDC, full genome sequencing of these recent viruses suggest that these viruses remain essentially bird viruses without any specific increased risk for humans. Culling of the affected poultry in European countries is ongoing or completed and protection zones and surveillance zones have also been established.

No human infections with this virus have ever been reported world-wide. ECDC’s updated rapid risk assessment concludes that the risk of transmission to the general public in Europe is considered to be very low.

HPAI A(H5N8) viruses cluster in the same haemagglutinin (HA) clade as A(H5N1) viruses from Asia and A(H5N6) — which has caused severe disease in humans in China — so the possibility of transmission from birds to humans cannot be completely ruled out. People in direct contact with or handling diseased birds or poultry and their carcasses may be at risk of infection.

Given this potential zoonotic risk, control measures for avian influenza in poultry and birds are being implemented by the affected countries to ensure that persons at risk are sufficiently protected from infection.