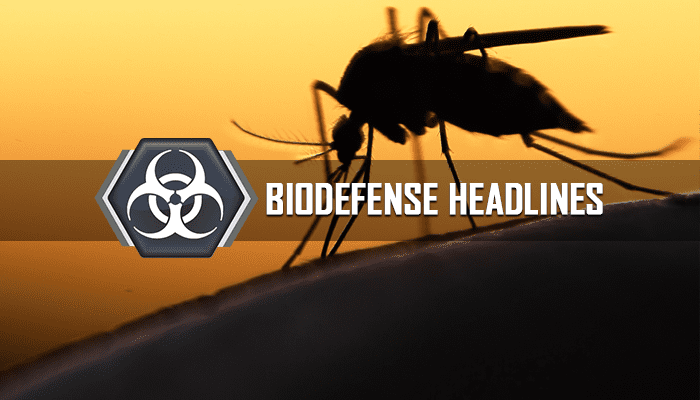 H.R. 5482 would require the plan be submitted to Congress addressing specific steps that the U.S. Department of Defense (DOD) would take to improve detection, diagnostics and patient care; to expedite research into military medical countermeasures; and to establish military infectious disease response teams, according to a summary provided by Rep. Bacon’s staff, which added that current geopolitical risks call for DOD to have a comprehensive “all-hazards” approach to biodefense. Ripon Advance

The race to find the next pandemic—before it finds us

The mystery epidemic had spread to four farms and was killing the piglets, almost 25,000 of them. By the time the outbreak burned out in May, it seemed to be something no one had seen before. They were right: The cause of the piglets’ illness, identified by the US-based EcoHealth Alliance and published in Nature last week, was a totally new virus. Wired

Johns Hopkins Center for Health Security will be working over the next eighteen months to develop a plan to develop an Outbreak Science Initiative to support the US government in responding to infectious disease outbreaks. Bifurcated Needle

On April 25th, the Blue Ribbon Study Panel on Biodefense will be hosting a meeting regarding transnational biological threats. From 10am to 3pm, you can attend (or watch live) this event. Pandora Report

Ofcom is examining instances where Kremlin-backed news channel potentially breached UK broadcast laws on impartiality. The UK broadcast regulator repeated that it could ultimately revoke the channel’s licence to operate in the UK following the conclusion of its investigation, forcing the channel off air. Guardian

What is an OPCW Designated Laboratory?

OPCW does not disclose the identity of designated labs that have contributed to specific OPCW activities. These labs are bound by secrecy agreements regarding the work they do with the OPCW. These agreements exist to ensure the integrity of the analysis and results provided by the designated labs. OPCW

Using a modeling tool developed by the US Centers for Disease Control and Prevention during the Ebola outbreak, researchers estimated the number of Ebola cases that might have occurred had the disease spread beyond the three countries in West Africa to cities in other countries at high risk for disease transmission (based on late 2014 air travel patterns). Infectious Diseases of Poverty

The plague: An overview and hot topics

Plague is one of the re-emerging diseases according to the WHO and Madagascar suffered in 2017 the most important plague epidemic of the 21st century with more than 2000 cases and 200 deaths. Peru and the Democratic Republic of Congo are also considered endemic areas. PubMed

Researchers generated a construct in which the coding region for Tul4 (an immunodominant protein of F. tularensis) is linked to OmpA (a protective antigen of Y. pestis) under the control of a robust F. tularensis promoter.  This construct was constructed in E. coli and was subsequently mobilized to F. tularensis LVS (Live Vaccine Strain). West Virginia Academy of Science

Brucellosis is an important zoonotic disease causing huge economic losses worldwide. This is the first report on minimally invasive monitoring of the efficacy of antibacterial therapy employing plasma RNA specific for live bacteria as a biomarker as well as on the use of RB51 phage lysate for successful immunotherapy of Brucellosis in cattle.PLOS Neglected Tropical Diseases

Modified Vaccinia Ankara (MVA) is a live, viral vaccine under advanced development as a non-replicating smallpox vaccine. A randomized, double-blind, placebo-controlled phase III clinical trial was conducted to demonstrate the humoral immunogenic equivalence of three consecutively manufactured MVA production lots, and to confirm the safety and tolerability of MVA focusing on cardiac readouts. PLOS One

Anthrax: A disease of herbivores (and a dangerous bioweapon)

For the most part, anthrax is a zoonotic infection, and humans are incidental hosts. Human infection is typically linked to infection of herbivores (eg, cattle, horses, sheep) from the soil where they graze. Spores of Bacillus anthracis are prevalent throughout the world and, depending on environmental conditions, can survive in soil for months to years. Healio

Illnesses likely linked to chopped romaine lettuce sourced from the winter growing areas in Yuma, Arizona. 35 people in 11 states have become ill. Most people reported eating a salad at a restaurant, and romaine lettuce was the only common ingredient identified among the salads eaten. FDA

The first known epidemic of extensively drug-resistant typhoid is spreading through Pakistan, infecting at least 850 people in 14 districts since 2016, according to the National Institute of Health Islamabad. The typhoid strain, resistant to five types of antibiotics, is expected to disseminate globally, replacing weaker strains where they are endemic. NY Times

A severe tissue-destroying ulcer once rare in Australia is rapidly spreading and is now at epidemic proportions in regions of Victoria, prompting infectious diseases experts to call for urgent research into how it is contracted and spread. Guardian

Monkeypox, which is an orthopox virus like smallpox, has largely been confined to the Democratic Republic of Congo, but in recent years cases in other African countries – and even importation to the United States in 2003 – have heightened concern. A new report published in Emerging Infectious Disease describes the reemergence of monkeypox in Nigeria after a nearly 40-year absence. Clinicians’ Biosecurity News

Paramedics rushed to Stoney Nakoda First Nation on Wednesday afternoon where they discovered a four-month-old girl dead at the scene and another child in serious condition. In total, 14 members of the same family were transported to the Alberta Children’s Hospital in Calgary in Calgary. CTV News Canada

On March 29 the FDA approved use of Leukine (sargramostim) to increase survival in adult and pediatric patients acutely exposed to myelosuppressive doses of radiation (Hematopoietic Syndrome of Acute Radiation Syndrome, or H-ARS). Myelosuppression occurs when radiation damages the bone marrow (.pdf) FDA

The new study, published in Lancet Infectious Diseases, shows that two years after getting the vaccine, volunteers had high and stable levels of antibodies to the Ebola Zaire virus. Researchers are now optimistic about combating the virus with this inoculation. Scientific American

For the first time ever, Brazil is attempting a nationwide immunization campaign against yellow fever. An ongoing outbreak of the mosquito-borne disease has killed hundreds of people in parts of Brazil where yellow fever traditionally wasn’t considered a threat and most residents aren’t vaccinated against it. NPR

Rapid diagnostics for bloodstream infections: A primer for infection preventionists

Accurate and rapid antimicrobial susceptibility testing with pathogen identification in bloodstream infections is critical to life results for early sepsis intervention. Advancements in rapid diagnostics have shortened the time to results from days to hours and have had positive effects on clinical outcomes and on efforts to combat antimicrobial resistance when paired with robust antimicrobial stewardship programs. This article provides infection preventionists with a working knowledge of available rapid diagnostics for bloodstream infections. AJIC Journal

Mobidiag, a Finnish biotech, has launched a diagnostic test that can rapidly detect the most common disease-causing microbes in the gut. The test can help manage infections more effectively at an earlier stage. Labiotech

EVD is transmitted by contact with infected blood or bodily fluids with an infectious dose of <10 viruses and high virus concentrations in blood 108 virus particles/mL.1 Although negative for virus by molecular testing, discharged NBU patients successfully treated for EVD are at risk of touching EVD contaminated surfaces within the patient room and may serve as a disease vector to areas outside of isolation on discharge from the unit. AJIC Journal

The use of long sleeves by nonscrubbed personnel in the operating room has been called into question. We hypothesized that wearing long sleeves and gloves, compared with having bare arms without gloves, while applying the skin preparation solution would decrease particulate and microbial contamination. American Journal of Infection Control

A biology professor from West Liberty University has been named Professor of the Year from the Faculty Merit Foundation. Joseph Horzempa has been working to develop antibiotics and vaccines based on his study of the bacterium Francisella tularensis, which he has been researching for more than a decade. WV Gazette

Drawn to public policy, Todt majored in the field at Princeton, where the degree program had an interdisciplinary approach. She also studied public policy at Harvard, getting a master’s degree and learning how to communicate effectively, she said. Both experiences served her well when she proceeded to work for the federal government. The Georgetowner