‘One Health’ Keeps Humans One Step Ahead of the Microbes

Paramedics bury a man who died of the Nipah virus in Kozhikode, southern India, in May 2018. There is no vaccine for the virus, which can cause raging fevers, convulsions and vomiting, and kills up to 75 per cent of people infected. (AP Photo/K.Shijith)

For a healthy planet, the health of all living creatures is equally important. One Health is a fairly new concept that prioritizes an interdisciplinary approach in science — to preserve the health of animals, humans and the environment. It is an approach that can be extended to any problem.

The history of One Health can be traced to the term “One Medicine,” coined by veterinary epidemiologist Calvin Schwabe and the later 12 Manhattan Principles, published by the Wildlife Conservation Society in 2004. The United States Centers for Disease Control and Prevention (CDC) has a website listing several One Health projects and several other organisations now operate on similar principles — such as the One Health Commission, One Health initiative and One Health platform.

This approach is important now because 75 per cent of emerging infectious diseases in humans have an animal origin. As our human population expands, deforestation and climate change will increase the potential for transfer of microorganisms from wildlife to humans and vice versa.

In this article, we have used two examples to explain the principles of One Health. We highlight how they enable us to tackle emerging problems that require solutions at the human-animal-environment interface.

The 1999 Nipah virus encephalitis outbreak in Malaysia is a classic example of a high-impact disease that was contained with the help of One Health principles.

Nipah virus infected more than 265 people and killed 40 per cent of them. This virus also caused significant disease in pigs in Malaysia, which led to the culling of domestic pig herds.

When the outbreak was first reported, the Malaysian government hastily responded by vaccinating against Japanese encephalitis virus (JEV). Since JEV is endemic in that region, this seemed like a logical decision. 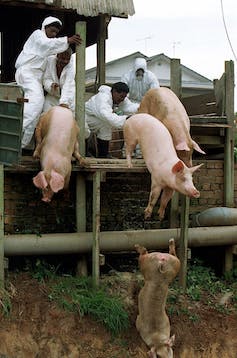 However, it soon became apparent that the outbreak was not caused by JEV. It took a tremendous amount of effort and international collaboration to bring together a team of veterinarians, clinicians, epidemiologists, environmental scientists, anthropologists and wildlife specialists to tackle this outbreak.

To contain the contagion, this team had to identify a novel infectious agent (Nipah virus), identify a potential reservoir host (bats) and then modify the natural setting (farming practices) by separating fruit trees and pig farms.

Subsequently, Malaysia developed policies to minimize contact between wildlife (bats) and domestic animals (pigs). This approach reduced the possibility of Nipah virus transmission from wildlife to other animals and humans.

Although the term One Health had not been coined yet, these experts used similar principles — to form interdisciplinary teams to contain an infectious disease at the human-animal-environment interface.

The growing problem of antimicrobial resistance (AMR) is known to most. As bacteria around us become resistant to the full spectrum of antibiotics, we are struggling to discover newer replacement drugs. The problem of AMR is multifaceted. It involves an intricate network between humans, animals and the environment.

As humans, we need to regulate the use of antibiotics. Antibiotic stewardship is critical to prevent the over, and often unnecessary, use of these drugs. The rise of AMR is increasing the burden on our public health infrastructures globally.

In order to limit this problem, the involvement of multiple governmental agencies, non-profits, research institutions and, more importantly, the dedication and determination of the public, is required.

In certain countries, antibiotics are freely available without a prescription. How do we change this practice? What role does the government play in setting out policies restricting the distribution of over-the-counter antibiotics? Are big pharmaceutical companies lobbying governments and providing physicians and pharmacists with incentives to “sell” more antibiotics? 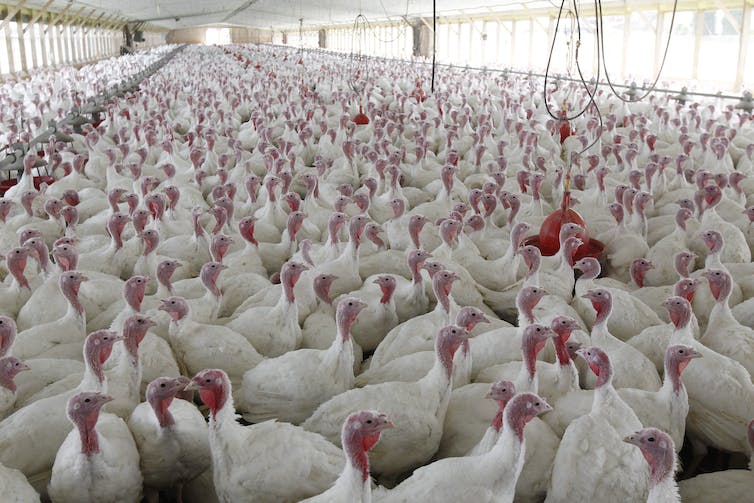 Antibiotics are commonly used to fatten the animals that supply the chicken, turkey, beef and pork we eat every day. Here, turkeys raised without the use of antibiotics are seen at David Martin’s farm, in Lebanon, Pa. (AP Photo/Matt Rourke)

In certain regions of the planet, antibiotics are used in agricultural animals such as cattle to boost their growth. These antibiotics can enter our food chain through milk and other dairy and animal products or give rise to resistant bacteria.

These are complicated questions. In certain situations, dairy produced from cattle enables a farmer to put food on the table for his or her family. There needs to be a principle of compensation, rather than penalties, for more compliance from the farming community. But again, where does a government in a resource-starved situation find the money for compensation?

Thus, antibiotic resistance is not just a biological problem, it is indeed a true One Health problem, which will require a tremendous team effort at the global level.

One Health does not solely depend on creating a vaccine or a therapeutic to tackle novel pathogens, which is often difficult and time-consuming. Instead, it aligns different disciplines to develop holistic and effective approaches to limit the transmission of disease.

This effort includes changing agricultural practices, traditional practices and superstitious beliefs — all of which come with a lot of challenge.

This article is republished from The Conversation under a Creative Commons license. Read the original article.