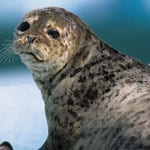 A novel strain of influenza virus has been identified as having crossed over from birds to aquatic mammals, causing an outbreak of fatal pneumonia in harbor seals in New England.

Seals with severe pneumonia and skin lesions suddenly appeared along the coastline from southern Maine to northern Massachusetts beginning last fall. Over the next few months, a total of 162 dead or terminally ill seals were recovered, most of which were less than 6 months old.

The virus apparently descended from an avian strain that has been circulating in North American waterfowl since 2002, which implies recent transmission from wild birds to seals. Unlike the strain in birds, this virus has adaptations to living in mammals and has mutations that are known to make flu viruses more transmissible and cause more severe disease. The virus also has the ability to target a receptor called SAα-2,6, a protein found in the human respiratory tract.

“Seal H3N8 has acquired the ability to bind sialic acid receptors that are commonly found in the mammalian respiratory tract. Mutations in the HA and PB2 genes – required for cell entry and replication, respectively – suggest enhanced virulence and transmission in mammals, but these putative attributes require further investigation,” stated a press release from the American Society of Microbiology. “Given these findings along with the long history of the spread of avian influenza to humans—most notably H1N1 and H5N1—seal H3N8 could pose a threat to public health.”

The findings reinforce how crucial wildlife surveillance is in predicting and preventing pandemics, particularly with viruses like this which have adapted to infect mammals.

“HIV/AIDS, SARS, West Nile, Nipah and influenza are all examples of emerging infectious diseases that originated in animals,” stated Professors Ian Lipkin and John Snow from the Mailman School of Public Health. “Any outbreak of disease in domestic animals or wildlife, while an immediate threat to wildlife conservation, must also be considered potentially hazardous to humans.”

CII collaborated with the National Oceanic and Atmospheric Association, New England Aquarium, USGS National Wildlife Health Center, SeaWorld and EcoHealth Alliance to publish their findings this week in mBio, the online open-access journal of the American Society for Microbiology.