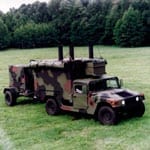 The CBRNE CLS contract is for the operation, maintenance and supply of highly complex systems for detection, mounted and dismounted reconnaissance, individual and collective protection, decontamination, and force protection against CBRNE threats for the military services and other government organizations operating in the U.S. and abroad. These locations include but are not limited to Europe, Korea, Afghanistan, Kuwait and other Southwest Asia locations.

Image: The Biological Integrated Detection System (BIDS) consists of a shelter mounted on a HMMWV and equipped with a biological detection suite. BIDS can be dismounted to function independently of its vehicle.