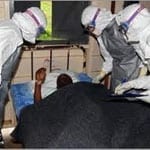 An outbreak of Ebola fever in the Democratic Republic of Congo may have claimed up to 32 lives since May, including that of a woman who had just given birth, the World Health Organisation (WHO) said yesterday.

On Saturday, a baby born prematurely in the isolation centre in Isiro — the epicenter of the epidemic in northeastern DR Congo — to a mother infected by the Ebola virus was still alive while his 29-year-old mother died, according to the WHO statement.

This appears to be the first instance of an infant being born alive to a patient infected with Ebola, according to a translated media report posted yesterday on ProMED Mail, the online reporting system of the International Society for Infectious Diseases (Source: CIDRAP).

According to the media report, staff did not know how to deliver her baby for fear of being infected. “The staff was guided by 2 eminent practitioners by telephone from Kinshasa, Professor and Doctor Mbungu Massamba, along with the Minister of Health, Dr. Felix Kabange Numbi,” states the article. The delivery went well; however the prognosis of the child remains unclear.

The ProMED moderator commented that the baby is still within the incubation period for infection contracted during delivery and that the staff members shown in the accompanying news photo appeared to be well protected with biosafety suits, respirators, eye protection, and full body covering, including the head. (Source: CIDRAP).