One Lump or Two? Sucrose Micro Disc for Injection-Free Vaccines 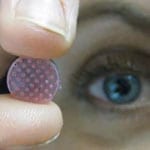 Scientists at King’s College London have demonstrated the ability to deliver a dried live vaccine to the skin without a traditional needle, and shown for the first time that this technique is powerful enough to enable specialized immune cells in the skin to kick-start the immunizing properties of the vaccine.

The researchers used a silicone mold developed by U.S. company TheraJect to create a microneedle array – a tiny disc with several micro-needles made of sugar which dissolve when inserted into the skin. The team formulated a dried version of a live modified adenovirus-based candidate HIV vaccine in sugar (sucrose) and used the mold to create the microneedle array. They found that the dried live vaccine remained stable and effective at room temperature.

To test the effectiveness of the microneedle array, they applied it to mice. Using imaging techniques they observed how the vaccine dissolved in the skin and were able to identify for the first time exactly which specialized immune cells in the skin ‘pick up’ this type of vaccine and activate the immune system. The researchers found the first evidence that a sub-set of specialized dendritic cells in the skin were responsible for triggering this immune response.

When compared with a traditional needle vaccine method, the immune response generated by the dried microneedle vaccine (kept at room temperature) was equivalent to that induced by the same dose of injected liquid vaccine that had been preserved at -80°C. The findings provide an important technical advance for a potential solution to the challenges of delivering live vaccines in resource-limited countries globally, without the need for refrigeration. Additionally, such a delivery mechanism provides a cheaper alternative to hypodermic needles, it would also remove safety risks from needle contamination and the pain-free administration could lead to more people taking up a vaccination.

“We have shown that it is possible to maintain the effectiveness of a live vaccine by drying it in sugar and applying it to the skin using microneedles – a potentially painless alternative to hypodermic needles,” said Dr. Linda Klavinskis from the Peter Gorer Department of Immunobiology at King’s College London. “We have also uncovered the role of specific cells in the skin which act as a surveillance system, picking up the vaccine by this delivery system and kick-starting the body’s immune processes.”