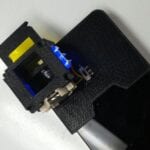 The U.S. Army Edgewood Chemical Biological Center (ECBC) is developing a cell phone-based, wide-field fluorescent imaging of microbeads for pathogen detection. In simpler terms, developing technology to collect a sample, analyze the results, geotag the location of the sample on Google Maps, and send the results to a laboratory for further review—all from the same Smartphone used to play video games.

Scientists at ECBC worked with a team at the University of California, Los Angeles (UCLA), to adapt its prototype of a plastic, clip-on “microscope” to fit an Android phone, commonly used by the Army. This device clips directly over the camera of the Smartphone and operates just like a microscope. The user collects a sample, slides it into the device, and snaps a picture using the camera in the cell phone. An application (“app”) downloaded to the phone will “read” the sample and analyze the results quickly, generating a clear positive or negative detection of the test agent. The UCLA team is developing the hardware and the software for the device, with ECBC’s team providing the diagnostic and detection assays that it will utilize.

“This takes the place of a standalone microscope and automates the process, which is perfect for soldiers or clinicians who are in a remote area without access to a laboratory,” said Patricia Buckley, a Research Biologist with ECBC’s Research and Technology Directorate and the ECBC lead for this project. “Computing in Smartphones has grown to be so complex that it can actually replace the computer for these devices.”

ECBC has also partnered with Holomic, LLC, a small business in California, to develop a second hardware add-on that can take existing assays in the field and integrate them into the Smartphone technology, making the results more user-friendly and available for archival within the biosurveillance community. This embodies the same concept of building an electronic database that can be clearly read and interpreted by any individual with access. 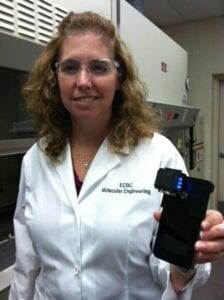 One of the most significant effects of this technology is that the results from either device can be stored in the phone and later added to a biosurveillance cloud database, allowing for an electronic archive of data that is available to anyone with access to the cloud. This is especially important because of the ability to tag the location from which the sample was taken, allowing for further surveillance and monitoring of that area.

The anticipated end-user for the technology is both military and civilian. “This is ideal for the solider out in the field, in a remote area without a cell tower nearby. He or she can still capture the data and store it until it can be sent back to the command post,” said Buckley. “It can also be valuable for clinics or hospitals in underdeveloped areas which may not have sophisticated testing equipment. They are more likely to be able to afford a device like this, which combines the ease and reliability of testing with the ability to communicate the results to a larger facility or organization.”

The team is focused on biological diagnostic tests, with a current focus on testing blood and urine for Salmonella typhimurium, a causative agent for food poisoning. In the near future, the team plans to add testing for four additional pathogens.

The ECBC, UCLA, and Holomic teams will continue to develop these projects, fully funded by either the Joint Science and Technology Office of the Defense Threat Reduction Agency or the Chemical Biological Medical Systems Joint Project Management Office, with plans to begin field tests of the prototypes throughout the country to determine their accuracy and ability to send and receive data.

“The coolest thing about this technology is that it’s taking a common test that’s done often in a laboratory and applying what we do here: reduce the size, reduce the cost, and reduce the weight. All with a package that is already being used by civilians and soldiers everywhere,” said Buckley. “It’s an exciting testament to the work we do here at ECBC in support of our mission.”