Commanding Federal and State Assets During a Disaster 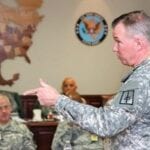 “Dual status commander” refers to the ability of a National Guard officer to command both federal (Title 10) and state (Title 32) forces during a natural disaster or chemical, biological, radiological or nuclear (CBRN) emergency.

Recognizing the convergence and growing scope of state and Federal military domestic missions following 9/11, Congress amended Title 32 in the 2004 National Defense Authorization Act, permitting National Guard commanders to retain their state commissions after being ordered to Active duty. This change allowed a National Guard officer to command both Federal and state forces simultaneously (dual-status) to preserve unity of command at the operational level.

As the commanding general of the 82nd Airborne Division at the time Katrina made landfall, Caldwell described arriving into New Orleans days after the storm and having little guidance on the division’s disaster response mission. He then compared that to the development of the National Response Framework and the interagency and military-civilian coordination, now in place, that enabled the Department of Defense to offer lifesaving and life-sustaining capability to the states even before Sandy’s landfall.

“It’s about forming those relationships before something happens,” said Caldwell.