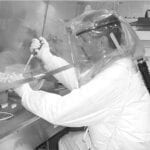 The new biodefense lab is located on the main campus of the Microbial Containment Complex at the National Institute of Virology (NIV) in Pune. The complex had already been operating laboratories at a BSL 3+ Level for hazardous pathogens.

“This facility is an expansion of current work going in NIV, Pune and would be tremendously useful in investigation outbreak of highly infectious diseases like Severe Acute Respiratory Syndrome (SARS), Avian and pandemic Swine Influenza, Nipah virus, Crimean Congo hemorrhagic fever virus and Kyasanur forest disease virus which created fear and affected at large our country,” states the Ministry of Health and Welfare. “It will also deal with other highly infectious pathogens emerging in the country in future.”

As most of the viral agents listed as tools of bioterrorism are of BSL-4 category, officials state the new laboratory will give the nation increased capability to deal with agents of bioterrorism.

“We wanted to make reagents and our requests to BSL-4 laboratories outside the country were not entertained,” stated N.K. Ganguly, former director of the Indian Council of Medical Research and reported early champion of the project. “That’s when we decided to set up our own facility and partnered with the Department of Science and Technology for the effort.”

The National Institute of Virology is a World Health Organization (WHO) Collaborating Centre for Arbovirus and Haemorrhagic Fever Reference and Research, National Influenza Center in India, and Influenza A H5 Reference Laboratory for South East Asia.

The total expenditure for project is reported as Rs. 65 crores (approximately $11.9 million USD).