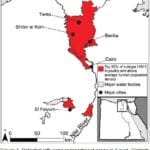 Researchers from UCLA’s Institute of the Environment and Sustainability Center for Tropical Research have developed a new technique to predict areas where viruses might reassort and generate a future pandemic.

Large-scale outbreak events in the last century arising from virus reassortment include the 2009 H1N1 swine flu outbreak that killed over 280,000 worldwide; and the 1957 and 1968 influenza pandemics each of which killed approximately 1 million people.

To identify geographic areas where agricultural production systems are more conducive to reassortment, the researchers fitted multivariate regression models to surveillance data on influenza A virus subtype H5N1 among poultry in China and Egypt and subtype H3N2 among humans.

They then applied the models across Asia and Egypt to predict where subtype H3N2 from humans and subtype H5N1 from birds overlap; this overlap served as a proxy for co-infection and in vivo reassortment. For Asia, we refined the prioritization by identifying areas that also have high swine density.

The models revealed that coastal and central China and Egypt’s Nile Delta are danger zones where bird flu could combine with human flu to create a virulent kind of super-flu. Other potential geographic foci of reassortment include the northern plains of India, the western Korean Peninsula and southwestern Japan.

Governments can use the data to prioritize these zones for increased monitoring to help detect a novel flu virus before it spreads worldwide and apply the model to any newly available data, say the researchers.

“The mixing of genetic material between the seasonal human flu virus and bird flu can create novel virus strains that are more lethal than either of the original viruses,” said senior author Thomas Smith, director of the Center for Tropical Research.

“These findings predicting potential outbreak sites can help decision-makers prioritize the most important areas where people, poultry and livestock should be vaccinated and animals should be monitored for novel viruses, which could help predict and prevent the next pandemic,” said Smith.