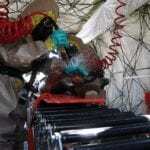 The Department of Defense last week released a new “Strategy for Homeland Defense and Defense Support of Civil Authorities.”  The policy postures the DoD to address current and emerging threats to the homeland through 2020.

The strategy identifies two priority missions for the department in the homeland: defend U.S. territory from direct attack by state and non-state actors; and provide assistance to domestic civil authorities in the event of natural or manmade disasters, potentially in response to a very significant or catastrophic event.

Various national-level and DoD strategic guidance documents identify the threats posed to the United States by the proliferation of WMD. Since 2005, DoD has made significant capability investments as directed by the 2010 QDR and reinforced by the 2012 Defense Strategic Guidance to detect, protect against, and – should prevention fail – respond to multiple, simultaneous attacks or incidents involving CBRN materials in the homeland.

Detecting, preventing, mitigating and responding to CBRN incidents requires specially trained and equipped response forces which are postured for rapid deployment. DoD must preserve its CBRN response capabilities including specialized agent detection, identification, and dispersion modeling systems as well as casualty extraction and mass decontamination capabilities. DoD general purpose forces are also core components of the military CBRN incident response force and include medical, security, engineering, logistics and transportation capabilities. The Department will also maintain trained and equipped command-and-control capabilities to manage the specialized and general purpose forces that will likely be needed to support civilian agencies after a CBRN incident.

The strategy also recognizes the need to further maximize DoD anti-terrorism support to the Homeland by expanding its capabilities for supporting law enforcement and homeland security agencies in six defined areas in the period to 2020: rapid and actionable intelligence on terrorist threats; capabilities to counter IEDs; capabilities to prevent terrorists’ use of WMD in the homeland; rapid acquisition, analysis and dissemination of threat information; programs to counter insider threats; and dual-effect military training.

DoD states it will maintain and enhance the Joint Intelligence Task Force for Combating Terrorism (JITF-CT) as its key node for sharing intelligence with interagency partners on terrorist threats. DoD commits in the strategy to improve and refine intelligence and information-sharing relationships that have developed since 9/11 and as a result of the Fort Hood shootings.

Read the report at Defense.gov: Strategy for Homeland Defense and Defense Support of Civil Authorities (.pdf)