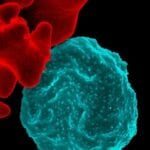 University of South Florida researchers played a key role in an international multidisciplinary project that has yielded a promising new antimalarial drug with the potential to cure the mosquito-borne disease and block its transmission with low doses.

Roman Manetsch, PhD, USF associate professor of chemistry, and Dennis Kyle, PhD, USF professor of global health, were co-leaders of the USF team, which helped to discover and develop a series of potent compounds to combat malaria known as the 4-(1H)-quinolone-3-diarylethers, or quinolones.

The USF researchers were part of larger Medicines for Malaria Venture (MMV) project team including Oregon Health & Science University in Portland, Drexel University in Philadelphia, and Monash University in Australia.

The researchers narrowed the most effective drug candidates in the quinolones series to one lead drug – ELQ-300 – now moving toward clinical testing.

The project team’s findings are published today in the journal Science Translational Medicine. USF’s Alexis LaCrue, PhD, a research associate in Kyle’s laboratory, was a co-first author for the paper along with Aaron Nilsen, PhD, of Portland VA Medical Center.

In initial preclinical tests, the lead drug demonstrated impressive preventive and transmission-blocking – and a low likelihood for developing rapid resistance to major strains of malaria parasites.

In addition, ELQ-300 could likely be produced more cheaply than existing antimalarial drugs – a major advantage in treating a tropical disease that kills nearly one million people a year and causes recurring bouts of severe and incapacitating illness, most often among poor people in developing countries.

“This is one of the first drugs ever to kill the malaria parasite in all three stages of its life cycle,” said Kyle, a member of the USF College of Public Health’s Global Infectious Diseases Research team. “So, it may become part of a new-generation therapy that not only treats sick people and prevents them from getting ill, but also blocks the transmission of malaria from mosquitoes to humans … If the drug can break the parasite life cycle, we may ultimately eradicate the disease.”

New life from an old class of compounds

The new drug class identified by the researchers were derived from the first antimalarial quinolone, endochin, discovered more than 60 years ago but never pursued as a treatment because it appeared not to work in humans.

Using new technology to optimize the quinolones, the MMV project team demonstrated that these compounds were indeed highly effective against Plasmodium falciparum, the most lethal strain of malaria, and Plasmodium vivax, the major cause of malaria outside Africa. The quinolones target both the liver and blood stages of the parasite as well as the forms critical for disease transmission.

“This was a very challenging project requiring years of hard work, collaboration across disciplines, and a good portion of luck,” said Manetsch, whose laboratory specializes in medicinal chemistry, drug discovery and development of novel chemical probes to characterize drug-protein interactions.

In humans, the malaria parasite targets the liver after it enters the bloodstream through the bite of an infected mosquito. Once inside the liver, the infecting parasites for most types of malaria multiply and rupture liver cells, escaping back into the bloodstream — although sometimes parasites can remain dormant in the liver for extended periods. The parasites, now modified to attack red blood cells, rapidly create more parasites, which spread throughout the bloodstream in waves.

The researchers needed to find and fine-tune a drug with a long half-life both to prevent malaria and to offer long-term protection against reinfection.

“It was a balancing act to optimize an antimalarial drug so that it was soluble and metabolically stable, without compromising its potency,” Manetsch said. “We wanted a compound that within an individual would not break down too quickly, remain circulating in the blood for a long enough period to kill the parasites, and be highly active in blocking transmission in rodent models of malaria.”

The antimalarial drug developed needed to be potent enough to work without harmful or bothersome side effects.

ELQ-300 targets a protein complex of the mitochondria that is integral for the energy household of a cell, Manetsch said. That’s good when you’re trying to incapacitate a malaria parasite’s powerhouse, but the same hit in a human’s mitochondria could be disastrous, he added.

So, Manetsch, with the help of Kyle’s expertise in parasitology, structurally modified the quinolone scaffold so that the drug candidate ELQ-300 would selectively hit only the malaria parasite’s target while sparing the human mitochondria.

With the rapid emergence of multi-drug resistant strains of malaria, the need to find new drugs capable of delaying or preventing drug resistance has become even more pressing, researchers say.

The quinolones, including ELQ-300, target the same biological pathway as atovaquone, the main component of Malarone, one of the newest combination drugs used to treat malaria. But, in repeated experiments ELQ-300 did not generate drug-resistant strains of the malaria parasite – making it a significant improvement over atovaquone.

In addition, the new drug’s design makes it more effective at lower doses, hopefully meaning fewer and smaller pills for patients at a lower cost, said Kyle, a technical advisor for the MMV team preparing ELQ-300 for clinical trials.