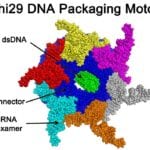 Scientists have cracked a 35-year-old mystery about the workings of the natural motors that are serving as models for development of a futuristic genre of synthetic nanomotors that pump therapeutic DNA, RNA or drugs into individual diseased cells.

The researchers explain that two motors had been found in nature: a linear motor and a rotating motor. The breakthrough discovery of a third type, a revolving molecular motor, reveals a new way to move DNA through cells.

The motor moves DNA with a revolving in the same motion as the Earth revolving around the sun. “The revolution without rotation model could resolve a big conundrum troubling the past 35 years of painstaking investigation of the mechanism of these viral DNA packaging motors,” the report states.

Their report revealing the innermost mechanisms of these nanomotors in a bacteria-killing virus — and a new way to move DNA through cells — was published last week in the journal ACS Nano.

Peixuan Guo, Ph.D., study co-author and Chair of Nanobiotechnology at the University of Kentucky College of Pharmacy, pointed out that nanomotors will open the door to practical machines and other nanotechnology devices so small that 100,000 would fit across the width of a human hair.

One major natural prototype for those development efforts is the motor that packages DNA into the shell of bacteriophage phi29, a virus that infects and kills bacteria. Guo’s own research team wants to embed a synthetic version of that motor into nanomedical devices that are injected into the body, travel to diseased cells and pump in medication.

A major barrier in doing so had been uncertainty and controversy about exactly how the phi29 motor moves. Scientists thought that it worked by rotating or spinning in the same motion as the Earth turning on its axis, but the team’s breakthrough challenges this notion.