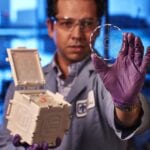 Researchers at Sandia National Laboratories are developing a medical instrument that will be able to quickly detect a suite of biothreat agents, including anthrax, ricin, botulinum, shiga and SEB toxin.

The device, once developed, approved by the Food and Drug Administration and commercialized, would most likely be used in emergency rooms in the event of a bioterrorism incident.

“This is an unmet need for the nation’s biodefense program,” said Anup Singh, senior manager for Sandia’s biological science and technology group. “A point-of-care device does not exist.”

Sandia’s biosciences and microfluidics program areas have continued to evolve with a string of notable projects, including:

“This will take things to the next level,” said Singh. In addition to the broader suite of toxins and bacterial agents that the device would test for, the project includes comprehensive testing with animal (mouse) samples.

This is an important step, Singh said, since toxins may behave differently in live animals and humans than in laboratory blood samples. “We are getting closer and closer to translational elements of research, which involves testing in animal and clinical facilities. This is part of the maturation of our bioresearch activities at Sandia.”

The project also will increase what SpinDx can do, he added.

“When you look for bacterial agents, you don’t want to rely solely on proteins because you won’t get the detection sensitivity you need,” explained Singh. “So we are also using other methods that may lead to better detection limits and additional confirmation.”

The new NIH project includes collaborators with expertise in animal modeling as well as device manufacturing.

The University of Texas Medical Branch, with whom Sandia enjoys a years-long partnership, together with the U.S. Department of Agriculture’s Western Regional Research Center in Albany, Calif., are providing Sandia with expert insight into toxins and diseases at animal lab facilities. Bio-Rad, a manufacturer and distributor of a variety of devices and laboratory technologies, is serving as a consultant on the project to evaluate plans for product development, assist with manufacturers’ criteria on the device that is developed, and provide important feedback when a prototype is built.

Although the latest NIH award represents a continuing success story for Sandia’s microfluidics/bioresearch work, Singh stresses that it was part of a thoughtful multi-year strategy.

“You’ve got to keep innovating and coming up with the next thing,” he said. “Every technology has its lifecycle. As good as SpinDx is, we know there will be other technologies, better technologies that come along in the next few years. We have to continue to innovate to meet the needs of our customers, understand what other competing technologies are being designed to solve the problems and develop technologies that provide an improvement.”

The need for diagnostic devices for biodefense is not going away, Singh said, since there are always new diseases springing up that lack good diagnostic assays.

“Plus, we want dual-use devices that combat both man-made and nature-made problems,” he added. “We’re not just going to wait for the next anthrax  letter incident to happen for our devices to be used and tested; we want them to be useful for other things as well, like infectious diseases.”

Expanding into those areas, he said, will keep Sandia’s bioresearch efforts engaged for years to come.

“That’s where the value of the national labs really comes in,” Singh said. “Our capabilities and culture are a very good fit for tackling long-term problems that require a sustained effort.”

Image: Sandia’s SpinDx device features centrifugal microfluidics, or “lab-on-a-disk” technology, which uses centrifugal forces to manipulate samples and reagents through microfluidic channels implanted on disks that are of the same size as a standard CD or DVD. (Photo by Jeff McMillan)