WHO Concerned About Poliovirus Outbreak in Horn of Africa 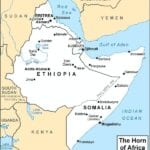 An outbreak of wild poliovirus type 1 (WPV1) in the Horn of Africa has prompted urgent vaccination campaigns in the region, according to the World Health Organization.

A four-month-old girl near Dadaab, Kenya, developed symptoms at the end of April. Two healthy contacts of the child then tested positive for WPV1. They are the first laboratory confirmed cases in Kenya since July 2011. Additionally, a case of WPV1 in Banadir, Somalia was confirmed on 9 May 2013.

As investigations into the outbreak are ongoing, the risk to neighboring countries is assessed as very high, due to large-scale population movements across the Horn of Africa and persistent immunity gaps in some areas.

The first vaccination campaign, reaching 440,000 children began on May 13, 2013 in Somalia and a second round of vaccination is planned for May 26, 2013 in synchronization with the affected parts of Kenya.

An alert for enhanced surveillance for polio has been issued to all countries across the Horn of Africa, highlighting the need to conduct active searches for any suspected cases. All countries are urged to rapidly identify sub-national surveillance gaps and to take measures to fill the gaps.

In 2005, polio spread east across the African continent, and into Yemen and the Horn of Africa, resulting in over 700 cases. Since then, international outbreak responses have been adopted and new monovalent and bivalent oral polio vaccines have been developed, which can significantly reduce the severity and length of polio outbreaks.