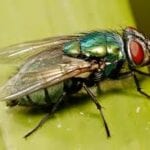 A team of scientists from the Australian National University is examining ways in which the resilient Australian sheep blowfly, a pest that has proven highly resistant to insecticides, may also pave the way to an antidote for chemical warfare agents.

“The Australian sheep blowfly has been exposed to organophosphates for decades and now produces a mutated protein, called alpha-esterase-7, which has evolved to soak up and detoxify the organophosphate, so flies can now survive being sprayed,” said Dr. Colin Jackson of the Research School of Chemistry.  “The silver lining in the development of insecticide resistance in blowflies is that nature might have created a potential treatment for human organophosphate poisoning.”

Organophosphates are commonly used insecticides that act by blocking nerve signals in insects. An estimated hundreds of thousands of human fatalities globally occur every year as a result of organophosphate poisoning.

“Even with the very best treatment, the mortality rate for organophosphate poisoning is quite high and we really need more effective treatments,” said Jackson. Chemical weapons using organophosphate-based nerve agents, such as sarin gas or VX, are similarly very difficult to treat.

With funding from the U.S. Defense Threat Reduction Agency (DTRA) and in collaboration with CSIRO, the research team took the gene for the organophosphate resistant protein from the blowfly and engineered it so that large amounts of the protein could be produced in the bacterium Escherichia coli.

The team was then able to produce large amounts of the resistance protein, form them into crystals and analyze how X-rays were scattered by the crystal to determine the protein’s structure.

Beyond enabling design of more effective pesticides and treatments for humans with pesticide poisoning, the mutated protein is now being studied for the potential of creating a novel antidote for victims of chemical warfare agents.