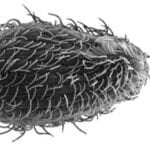 A toxin dangerous to humans may help E. coli fend off aquatic predators, enabling strains of E. coli that produce the toxin to survive longer in lake water than benign counterparts, a new study finds.

Researchers from the University at Buffalo and Mercyhurst University reported these results online June 7 in the journal Applied and Environmental Microbiology.

“The take-home lesson is that E. coli that produce Shiga toxin persisted longer in recreational water than E. coli that don’t produce this toxin,” said UB Professor of Biological Sciences Gerald Koudelka, PhD, who led the study. “This is because the toxin appears to help E. coli resist predation by bacterial grazers.”

The findings have implications for water quality testing. They suggest that measuring the overall population of E. coli in a river or lake — as many current tests do — may be a poor way to find out whether the water poses a danger to swimmers.

Past research has shown that overall E. coliconcentrations don’t always correlate with the levels of dangerous, Shiga toxin-producing E. colipresent in the water, Koudelka said. His new study provides one possible explanation for why this might be.

E. coli, short for Escherichia coli, is a bacteria found in human and animal intestines. Most types of E. coliare harmless. But those that produce Shiga toxin can make people very sick, causing symptoms such as hemorrhagic diarrhea. Severe cases can lead to death.

In their new study, Koudelka and his colleagues obtained water samples from Presque Isle State Park and Mill Creek Stream, both in northern Pennsylvania. The water contained protists — tiny, single-cellular creatures that feed on E. coli.

The results: The toxin producers fared much better against the grazing protists than their toxin-free counterparts. Over 24 hours, STEC populations fell by an average of 1.4-fold, in contrast to 2.5-fold for the Shiga-free bacteria.

The STEC strain that produced the most Shiga toxin also lasted the longest, persisting in water for about 48 hours before declining in numbers.

Each E. coli strain was tested in its own experiment (as opposed to one big experiment that included all six). All of the STEC strains studied were ones that had previously caused illness in humans.

The findings add to evidence suggesting that current water quality tests may not capture the whole story when it comes to E. coli danger in recreational waters, Koudelka said.

“If you’re only testing generally for fecal indicator bacteria, you could miss the danger because it’s possible to have low levels of E. coli overall, but have most of that E. coli be of the STEC variety,” he said. “This would be worse than having a large E. coli population but no STEC.”

The opposite problem can also occur, Koudelka said. “You could have high E. coli populations in a lake, but absolutely no STEC,” he said. “This is the economic part of it: It’s a problem because you might have a beach that’s closed for days even though it’s safe.”

The study was funded by the National Science Foundation and Mercyhurst University, and the research is part of Koudelka’s ongoing investigations into the lives of aquatic microbes, including bacteria and protists. He is particularly interested in how one species may help regulate the level of others through predation and other interactions. Koudelka’s work has shown that Shiga and other dangerous toxins probably arose as antipredator defenses in what he calls a “microbiological arms race,” and not to kill humans.

Image: The protist Tetrahymena hunts E. coli in this photo illustration, which features a microscope image of Tetrahymena (left). A new study finds that Shiga toxin may help E. coli survive in the face of such predation.