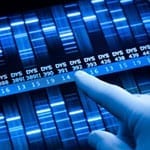 Next Generation Sequencing (NGS) is a surveillance tool used by researchers to rapidly and economically gather DNA information from biological samples. The Department of Defense is looking into using NGS at installations outside the continental United States (OCONUS).

“This is a way for researchers in the U.S. to help our overseas colleagues detect and characterize emerging pathogens,” said Lt. Vishwesh Mokashi, department head of the Genomics and Bioinformatics department at the Naval Medical Research Center (NMRC).

NMRC researchers are working with scientists at the Los Alamos National Laboratory (LANL) to test the deployment of the NGS technology called “Edge Bioinformatics.” NMRC researchers are identifying the logistics required to gather the necessary bioinformatics information, specifically DNA sequence information about thousands of organisms from E. coli to Ebola virus, as well as determining the data management systems needed that would lead to the successful stand-up of NGS capabilities at OCONUS locations.

“It sounds complicated,” said Mokashi, “but what it boils down to is a point and click software program that will automate some aspects of bioinformatic analysis and help OCONUS scientists to analyze NGS data.”

Bioinformatics is a very specialized field of DNA data analysis that requires a unique blend of training in biology and computer science. The sheer size and complexity of NGS datasets cause bioinformaticists to routinely write their own computer programs to answer whatever question the experiment is designed to ask. Smaller labs in universities and overseas often do not have the resources available to support a team of bioinformatic professionals or the highperformance computers required for their work.

The Edge Bioinformatics software is being designed to enable trained bioinformaticians in the U.S. to support OCONUS scientists by logging in remotely to help troubleshoot and to interpret results of automated analyses that the OCONUS labs will perform.

“This system, when deployed, will allow for enhanced customized data analyses, which overseas laboratory personnel may not currently be set up to do,” explained Mokashi.

A live demonstration of the Edge software prototype was conducted at NMRC’s Biological Defense Research Directorate (BDRD) at Ft. Detrick in Frederick, Md, June 12, to give stakeholders a feel for the analytic capabilities of the system, the intuitiveness of the user interface, and the small footprint of the computational hardware it runs on.

Researchers from BDRD and LANL staged two examples of how an OCONUS scientist could analyze NGS data using the Edge Bioinformatic software.

In one example, the goal was to diagnose a new strain of flu from a clinical sample and then quickly design a diagnostic test for that strain. The team also demonstrated how the OCONUS scientist and a bioinformatician in the United States could work together through a remote connection to interpret results of the automated analyses. In half a day’s time or less, the automated system produces results that a single Ph.D. biologist in an OCONUS lab might work days or weeks to produce manually.

“We were able to successfully demonstrate the analytic power of our system and how user friendly it is during the demonstration,” said Mokashi. “This is just one step of many that needs to be taken before we can go live with the deployment of the system.

Once that happens, we will be able to support a range of analysis types, from polymerase chain reaction assay development to characterization of an unknown organism.”

“The demonstration successfully showed that bioinformatic software modules could be controlled by a remote operator to assess results and provide feedback on various steps during NGS data processing,” said Mokashi. “This system, when completely deployed, will support both Army and Navy OCONUS labs, creating a common platform for NGS data analysis.”