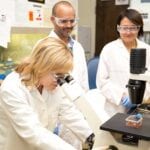 Quite the opposite is true.

The efforts to combat this epidemic are being spearheaded by a team of Lawrence Livermore National Laboratory (LLNL) scientists. Led by Monica Borucki of LLNL’s Biosciences and Biotechnology Division, the Lab researchers have made promising new discoveries that provide insight into the emergence of inter-species transmittable viruses.

They discovered that the genetic diversity of a viral population within a host animal could allow a virus to adapt to certain conditions, which could help it reach a human host. This discovery advances the scientific understanding of how new viruses produced from animal reservoirs can infect people. An animal reservoir is an animal species that harbors an infectious agent, which then goes on to potentially infect humans or other species. Borucki’s team is investigating viruses related to SARS and MERS, but not the actual viruses themselves.

“The team’s findings are the first steps in developing methods for predicting which viral species are most likely to jump from animals to humans and potentially cause outbreaks of diseases,” Borucki said.

Coronaviruses are one of the groups of viruses that most commonly jump to new host species as evidenced by SARS and MERS, according to Borucki. These viruses appear to have jumped from animals to humans and are capable of causing severe diseases in humans.

“Our discoveries indicate that the next generation of genetic sequencing technology, combined with advance computational analysis, can be used to characterize the dynamics of certain viral populations,” she said.

In June, a research paper published in the Journal of General Virology by other scientists cited the Borucki team’s findings as pioneering, and it recommended their methodology for studying viral evolution.

Borucki said her team’s research findings eventually could be used to influence how vaccines and antivirals are designed and tested.

“Deep Illumina sequencing is already being used extensively to understand HIV and hepatitis C resistance to antivirals,” she said. “We plan to follow up our findings by examining how animal host traits such as nutritional status (being malnourished or obese) influence how viruses evolve.”

This latest discovery is part of a string of achievements for Borucki’s team. In 2010, they secured a three-year, $1.4 million contract from DTRA to fund a research project to study how to better determine the origins of a virus.

Read more at PLOS ONE: The Role of Viral Population Diversity in Adaptation of Bovine Coronavirus to New Host Environments.