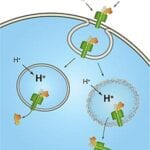 A new hypothesis concerning a crucial step in the anthrax infection process has been advanced by scientists at the National Institute of Standards and Technology (NIST) and the U.S. Army Medical Research Institute for Infectious Diseases (USAMRIID) at Fort Detrick, Md.

The research teams have explored the behavior of the toxins that rapidly overwhelm the body as the often-fatal disease progresses. Their findings suggest a new possible mechanism by which anthrax bacteria deliver the protein molecules that poison victims. Anthrax is easily weaponized; the findings could help lead to a more effective cure.

Anthrax bacteria kill by releasing three toxins that work in concert to destroy cells. One toxin, called PA, attaches to the cell membrane, where its surface serves as a sort of landing pad for the other two toxins, called LF and EF. Once several molecules of LF and EF have latched onto PA, the cell membrane tries to destroy these unwanted hangers-on by wrapping them up in an “endosome,” a small bubble of membrane that gets pinched off and moved into the cell’s interior. There, the cell attempts to destroy its contents by a process that includes making the interior of the endosome more acidic.

But before the cell can fully carry out its plan, the LF and EF escape from the endosome and wreak havoc in the cell’s interior. The question is: how do these toxins escape?

“A recent hypothesis is that LF and EF completely unfold and then squeeze through the narrow hole that PA forms in the endosomal membrane,” says NIST physical scientist John Kasianowicz. “However, the studies used to support this concept make use of short segments of the toxins, not their native full-length versions. The results don’t show that the complete LF and EF are transported through the pore or whether they refold into functional enzymes once they reach the other side. So, we decided to look at other possible explanations.”

The NIST/USAMRIID team explored the behavior of full-length toxins using an artificial membrane that mimics a cell’s exterior. They put the toxins mixed in salt water on one side of this barrier and slowly rendered this fluid more acidic, resembling conditions within an endosome. But the change in chemistry apparently altered the physical characteristics of the LF and EF toxins, because it caused them to bind irreversibly to the PA pore, creating a “complex” of multiple toxins. This result alone suggested it would be difficult, if not impossible, for LF and EF to thread through the pore.

In addition, the team discovered that the bound toxins tend to rupture membranes. This finding led them to suggest that perhaps it is complexes of LF or EF bound to PA that gets into cells, and that these complexes are the active toxins inside cells.

Kasianowicz says this new hypothesis could explain previous experimental results, in which the complex was found in the blood of animals that died of anthrax. But he emphasizes that the matter is not yet settled.

“We don’t know enough to choose between these theories—and in fact it’s possible that the toxins escape the endosome by more than one mechanism,” he says. “But it’s important that we better understand this step in the process to thwart anthrax more effectively.”