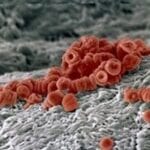 A University of Connecticut research team has found a way to stabilize hemoglobin, the oxygen carrier protein in the blood, a discovery that could lead to the development of stable vaccines and affordable artificial blood substitutes.

The team’s novel approach involves wrapping the polymer poly(acrylic acid) around hemoglobin, protecting it from the intense heat used in sterilization and allowing it to maintain its biological function and structural integrity.

“Protein stability is a major issue in biotechnology,” says Challa V. Kumar, UConn professor of chemistry and biochemistry and the primary investigator on the project. “What we’ve done is taken this protein molecule and wrapped it up in a polymer chain in order to stabilize it. In thermodynamics terms, we have restricted the entropy of the denatured state of the protein and stabilized it beyond our expectations. The system also exhibits a high degree of reversibility. The protein can be denatured and renatured many, many times. This is the very first example of its kind in the literature of all protein science. No one has ever been able to achieve this kind of stability for proteins.”

A popular example of denaturation can be found in the protein present in eggs. As the egg is cooked and the protein around the yolk turns white, the protein in the egg is denatured and cannot return to its prior, natural state. Likewise, when proteins in a living cell are exposed to heat they become denatured, which disrupts their activity and can lead to cell death. When protein is a critical element in a vaccine and breaks down, the product becomes useless.

In searching for a viable material to serve as a protein stabilizer, Kumar’s team found one that is readily available, inexpensive, and can be modified chemically for further improvements.

The poly(acrylic acid) used in the study is the same material found in disposable diapers, and one of the most abundant synthetic polymers on the planet. This particular polymer, says Kumar, is very hydrophilic, meaning it likes water. The polymer naturally binds to hemoglobin, creating a tight seal that protects the protein molecule and allows it to retain its structural integrity even after heating it to 120˚C for extended periods of time (steam sterilization).

Kumar is proud of the fact that undergraduates participated in such a major research endeavor. “One of our missions at the University is to train undergraduates in research,” he says, “and we take that very seriously.”

The team tested various protein-polymer compositions using transmission electron microscopy (TEM) and optical spectroscopy techniques. The research was supported by multiple grants from the National Science Foundation, topping $3 million over the past 10 years.

In a paper published last year in the Journal of Materials Chemistry, Kumar and his team showed how hemoglobin wrapped in low molecular weight poly(acrylic acid) formed nanoparticles that retained their natural state and structure, even after they were subjected to the harsh conditions of steam sterilization. Under the same conditions, hemoglobin samples that were not wrapped in the polymer lost the majority of their structure and function.

As part of its research, the team chose to examine the feasibility of using hemoglobin as an artificial blood substitute. Hemoglobin, when extracted from blood, breaks down and is toxic in its pure form. Since hemoglobin is the critical oxygen carrier protein in blood, Kumar and his team are looking at ways of stabilizing hemoglobin in its natural form so that it retains its activity and stays harmless when administered as a transfusion agent. This could lead to a new substitute for human blood, which is frequently in short supply. Blood shortages are expected to get worse in coming years, as more and more people in the world are likely to need blood transfusions, Kumar said.

The research has caught the attention of scientists at Merck, a global leader in prescription medicine, vaccines, and biologic therapies.

The abundance of the polymer, the flexibility of the process, and the simplicity of the approach enhances its potential for mass production, Kumar says. Kumar and the rest of the UConn research team are working with the University’s Technology Partnerships and Licensing group of UConn’s Office of Economic Development and a U.S. patent application has been filed for the new technology.

Read more about the team’s research at the Journal of Materials Chemistry: Ultra-stable hemoglobin–poly(acrylic acid) conjugates.