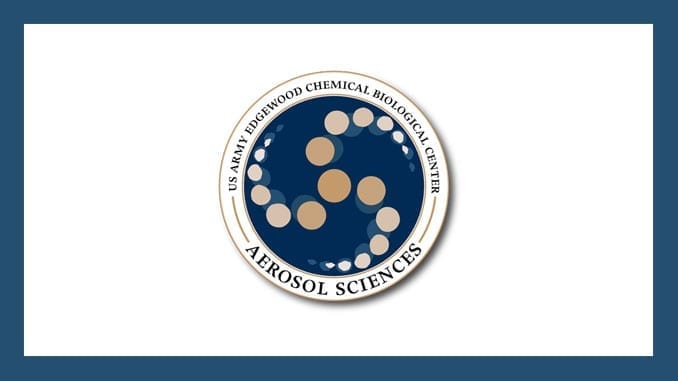 Scientists and engineers at the Edgewood Chemical Biological Center (ECBC) develop technologies that can detect and mitigate chemical or biological threats. All technologies are put through rigorous, extensive testing to measure the effectiveness of the equipment for use in real world situations.

ECBC’s ambient breeze tunnel (ABT) is one of the unique means used to characterize aerosol clouds. The tunnel is a converted 1941 warehouse which can be maintained at the same temperature and humidity as the outside temperature, allowing testing to take place in actual environmental conditions but within a controlled space.

Recent upgrades to the tunnel filters permit scientists to test equipment in a more sophisticated, realistic, and safe environment. A large, variable speed fan pulls air up to five miles per hour down the tunnel and through a HEPA filtration unit. “The wind speed only goes up to five or six miles per hour however, that is roughly the average wind speed on a given day on Earth,” said Jason Edmonds, the Aerosol Sciences Branch Chief.

There are two other breeze tunnels commonly used for chemical and biological defense (CBD) studies, one is located at the Dugway Proving Ground and the other is at the Battelle Memorial Institute in West Jefferson, Ohio. “We can hang things from the ceiling, or put them on a wall if we needed to. Other breeze tunnels probably would not be able to do that without damaging their structure,” Edmonds said. The test section is coated with a rubberized paint that can withstand decontamination techniques such as bleach, Vaporized Hydrogen Peroxide, and other reactive chemicals enabling decontamination efforts after each test.

Current ABT projects investigate the reaerosolization of biological material from complex surfaces of Chemical and Biological Defense (CBD) interest. “The reaersolization tests are indicative of the type of tests within the ABT are typically performed,” Edmonds said.

Aersolization looks at what happens to biological agent when it is exposed into the air. Reaerosolization takes that a step further and explores what happens after an agent is exposed to the air and then lands on a surface such as a car hood, or a window pane and then becomes airborne again. Research like this helps the Army and the Department of Defense to better understand the life cycle of biological agents in order to protect warfighters and the nation from them.

During reaersolization tests, vehicles or surfaces of interest are moved into the front section of the breeze tunnel where they are placed under a well-characterized and sealed canopy. Biological warfare agent simulant, or live vaccine strains of agent, is then disseminated within the canopy and the particulate is allowed to settle and deposit onto the test surfaces.

After dissemination, the canopy is removed and the fan located at the end of the tunnel is powered on, generating a predetermined wind speed. Aerosol collection technologies, particle counters, and sampling wipes can then be used to determine the amount of material which has reaerosolized from the test material. While the fans are on and the test is in progress, team members can observe the testing from a safe location in one of the two observation rooms located in the breeze tunnel.

The rooms have electrical and data ports to allow vendors and scientists network computers and equipment that allowing them to see data in real time while observing the test in progress which is a powerful capability if the need for troubleshooting arises.

The recently upgraded the HEPA filtration system enhances the testing capabilities of the ABT through allowing biological material testing to safely take place. “Previously, we had a less than optimal filter bank at the end of the tunnel,” said Edmonds. “The filters were very good, but there were a lot of leaks around the filters, so we never aerosolized anything here above Biosafety Level 1.With these upgrades, we can now do that.”

The facility upgrade can now more closely accommodate the needs of the CBD community to support larger projects that need to test more applicable biological material such as Bacillus anthracis. “Over the last year we have been finding ways to accommodate programs interested in collecting data for live agents in an outdoor environment,” Edmonds said. “The safety office has been a major support in this effort and has been working with the Aerosol Sciences Branch through these renovations.” One of the final steps in getting the facility up and running was to have the filter system certified which recently occurred.

One project the upgraded facility will support is a deposition efficiency of solid particulate basic science program, and the Joint United States Forces Korea (USFK) Portal and Integrated Threat Recognition Advanced Technology Demonstration (JUPITR ATD). The JUPITR ATD is a program that seeks to give biosurveillance capabilities to the Republic of Korea. To support this mission, the Aerosol Science Branch will use the breeze tunnel to aerosolize a live non-virulent strain of Bacillus anthracis and attenuated preparations of other microorganisms to challenge a number of systems in their ability to collect and detect biological warfare agents. Being able to capture this type of data is important to serving ECBC’s CBD mission and keep warfighters and civilians safe.

In addition to supporting key projects, the Aerosol Sciences team also hopes to use the upgraded facilities to pave the way for more collaborative projects with organizations like the Dugway Proving Ground. Edmonds finds that the more ECBC can partner with Dugway, the quality and strength of testing efforts will improve greatly.

“We collaborate [with Dugway], but mostly it involves us exchanging best practices pertaining to testing and testing techniques,” said Edmonds. “With our upgraded facilities and structural capabilities of the Breeze Tunnel, we can evolve that partnership into something where we can use our facilities to perform research and development on sensors with different agents and then transfer our solutions and technologies over to Dugway for testing and evaluation.”