Scientists have previously developed nanoparticles that can bind certain types of toxins and neutralize them. Nanoparticles, however, can’t be given directly to patients because the particles may accumulate in the liver, creating an additional health risk.

So an international team led by Dr. Shaochen Chen at the University of California, San Diego, set out to develop a nanoparticle-based detoxification device that wouldn’t be hazardous to patients.

The team developed a liver-inspired 3-D device made of hydrogel and nanoparticles that can remove toxins from blood. Designed for use outside the body, the device provides a proof-of-concept model for new detoxification techniques.

Toxins from animal bites and stings or from bacterial infections can damage cells, leading to pain and illness. Conventional treatments, such as antisera, may not completely neutralize the toxins.

The team made nanoparticles out of the polymer polydiacetylene. The chemical characteristics of polydiacetylene cause it to change its fluorescence pattern when it binds to toxins. Toxin binding changes its color from blue to red, and the intensity of red fluorescence increases with the amount of toxin bound.

The group next used 3-D printing to create a device that could capture and remove melittin from a solution. They formed scaffold structures composed of the nanoparticles embedded in a non-toxic gel often used in biomedical applications. They tested several 3-D scaffold patterns with different surface areas. A hexagonal pattern with a very large surface area, which mimicked the hexagonal organization of a liver lobule, trapped the toxins best.

To further test the ability of the scaffold to remove toxins, the scientists mixed red blood cells with melittin treated with the detoxification device. The device neutralized the toxin by capturing and separating it from the cells.

“The concept of using 3-D printing to encapsulate functional nanoparticles in a biocompatible hydrogel is novel,” Chen says. “This will inspire many new designs for detoxification techniques since 3-D printing allows user-specific or site-specific manufacturing of highly functional products.” 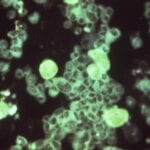