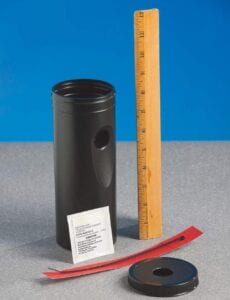 It took more than 20 years, but a device invented by Army entomologists to control the population of mosquitoes that carry diseases is now being put to use not only on military installations, but is available to the public as well.

“The primary targets of the device, called a lethal ovitrap, are female Aedes aegypti and Aedes lbopictus mosquitoes that can be found throughout the Eastern and Southern U.S., South America, and other parts of the world,” explained Thomas Burroughs, U.S. Army Public Health Command Entomological Sciences Program manager.

“These mosquitoes are carriers of dengue fever, West Nile virus, yellow fever and chickungunya virus,” said Burroughs. “A method of controlling vectors of these diseases has been sought by the military for many years.”

The trap works by exploiting the female mosquito’s biological need to lay eggs. “The traps contain a pesticide that kills both larvae and the adult female, thus preventing her from laying more eggs in other locations,” according to Sheila Adams, Entomological Sciences Program laboratory technician.

When first designed, the traps were used to monitor the type and number of mosquitoes in an area. In the 1990s, Brian Zeichner from the former U.S. Army Center for Health Promotion and Preventive Medicine – now USAPHC – and Michael Perich of the Walter Reed Army Institute of Research developed the breeding container. Ultimately, they enhanced its capabilities and made it lethal to the insects and their larvae. The USAPHC and WRAIR hold the patent on the device.

“These dark, water-filled containers mimic the natural breeding site of container-breeding mosquitoes,” said Burroughs. “Both the Aedes aegypti and Aedes albopictus mosquitoes prefer to lay their eggs in small, man-made containers that hold standing water, including rain buckets, flower pots and old tires.” Once the female goes into the trap, she and any hatchlings are history.

The lethal ovitraps have been used in several field studies to show their effectiveness in reducing mosquito populations and thus lowering the risk of disease transmission, according to Burroughs.

The trap has received an Environmental Protection Agency registration number, required for all products sold in the U.S. which contain pesticides. It is available through the federal supply system, and USAPHC environmental experts are encouraging installations and public health staffs to use it.

“This is a good news story for everyone,” said McCowin. “These traps will have a significant impact in reducing mosquito-borne illnesses around the world. They are an important tool in the inventory of Department of Defense pest control products.”

Image: The lethal ovitrap is filled with water and the velour paper landing strip and a pesticide-treated strip from the white packet are attached to the trap. When the female mosquito lands on the velour strip to lay eggs she receives a lethal dose of pesticide. Credit: Graham Snodgrass