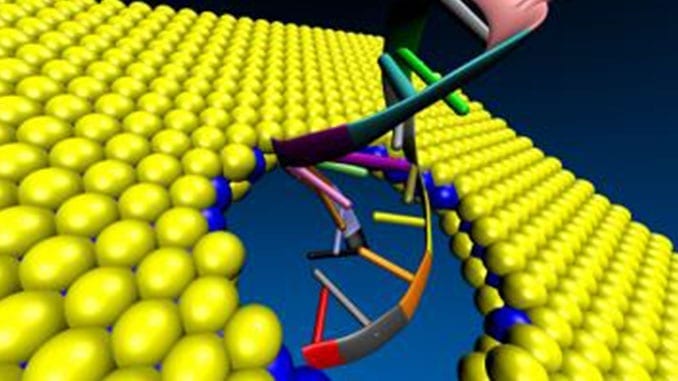 Gene-based personalized medicine has many possibilities for diagnosis and targeted therapy, but one big bottleneck: the expensive and time-consuming DNA-sequencing process.

Now, researchers at the University of Illinois at Urbana-Champaign have found that nanopores in the material molybdenum disulfide (MoS2) could sequence DNA more accurately, quickly and inexpensively than anything yet available.

“One of the big areas in science is to sequence the human genome for under $1,000, the ‘genome-at-home,'” said Narayana Aluru, a professor of mechanical science and engineering at the U. of I. who led the study. “There is now a hunt to find the right material. We’ve used MoS2 for other problems, and we thought, why don’t we try it and see how it does for DNA sequencing?”

As it turns out, MoS2 outperforms all other materials used for nanopore DNA sequencing – even graphene.

A nanopore is a very tiny hole drilled through a thin sheet of material. The pore is just big enough for a DNA molecule to thread through. An electric current drives the DNA through the nanopore, and the fluctuations in the current as the DNA passes through the pore tell the sequence of the DNA, since each of the four letters of the DNA alphabet – A, C, G and T – are slightly different in shape and size.

Most materials used for nanopore DNA sequencing have a sizable flaw: They are too thick. Even a thin sheet of most materials spans multiple links of the DNA chain, making it impossible to accurately determine the exact DNA sequence.

Graphene has become a popular alternative, since it is a sheet made of a single layer of carbon atoms – meaning only one base at a time goes through the nanopore. Unfortunately, graphene has its own set of problems, the biggest being that the DNA sticks to it. The DNA interacting with the graphene introduces a lot of noise that makes it hard to read the current, like a radio station marred by loud static.

MoS2 is also a single-layer sheet, thin enough that only one DNA letter at a time goes through the nanopore. In the study, the Illinois researchers found that DNA does not stick to MoS2, but threads through the pore cleanly and quickly.

“MoS2 is a competitor of graphene in terms of transistors, but we showed here a new functionality of this material by showing that it is capable of biosensing,” said graduate student Amir Barati Farimani, the first author of the paper.

Most exciting for the researchers, the simulations yielded four distinct signals corresponding to the bases in a double-stranded DNA molecule. Other systems have yielded two at best – A/T and C/G – which then require extensive computational analysis to attempt to distinguish A from T and C from G.

The key to the success of the complex MoS2 simulation and analysis was the Blue Waters supercomputer, located at the National Center for Supercomputing Applications at the University of Illinois.

“These are very detailed calculations,” said Aluru, who is also a part of the Beckman Institute for Advanced Science and Technology at the U. of I. “They really tell us the physics of the actual mechanisms, and why MoS2 is performing better than other materials. We have those insights now because of this work, which used Blue Waters extensively.”

Now, the researchers are exploring whether they can achieve even greater performance by coupling MoS2 with another material to form a low-cost, fast and accurate DNA sequencing device.

“The ultimate goal of this research is to make some kind of home-based or personal DNA sequencing device,” Barati Farimani said. “We are on the path to get there, by finding the technologies that can quickly, cheaply and accurately identify the human genome. Having a map of your DNA can help to prevent or detect diseases in the earliest stages of development. If everybody can cheaply sequence so they can know the map of their genetics, they can be much more alert to what goes on in their bodies.”

The research was supported by the Air Force Office of Scientific Research and the National Science Foundation.

Read the paper at ACS Nano: DNA base detection using a single-layer MoS2.

Image: A DNA molecule passes through a nanopore in a sheet of molybdenum disulfide, a material that researchers have found to be better than graphene at reading the DNA sequence. Credit: Narayana Aluru, University of Illinois 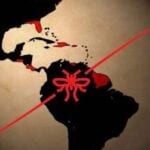 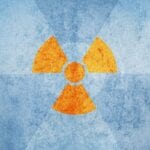