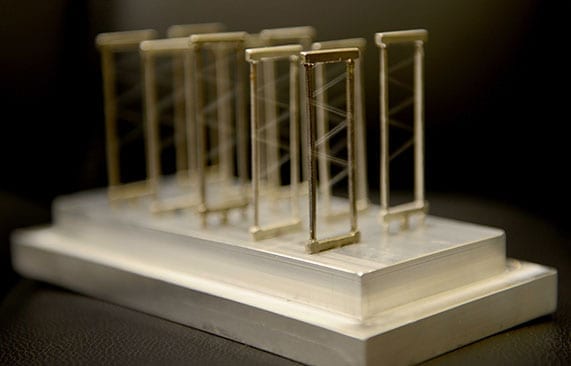 Tarantula webs wound around specialized forks are used during aerosol testing at the Whole System Live Agent Test chamber on Dugway Proving Ground, Utah. The web is used to suspend particles of an aerosol biological agent for study, mimicking the behavior of the agent suspended in air. Credit: Jacqueline M. Hames

A series of two-tined, stainless steel forks sit on a conference table in Dugway Proving Ground, Utah. The spider silk wrapped across the tines is barely visible against the dark wood of the desk. The unusual display is a key player in the work done at Dugway. The forks, and the spider web, are used in experiments at its Life Sciences division.

That’s right, scientists are hand-harvesting tarantula webs to study how an aerosolized agent behaves while suspended in the atmosphere.

“We’ve employed spiders to basically enable us to gather data that would otherwise, from an engineering standpoint, be very difficult to collect. … We have a limited understanding of how biological warfare agents behave once released in an attack. We also like to understand the differences in how a detector interacts with a biological particle as it is subjected to the climate where it is released, be that a subway tunnel or open field,” said Dr. Brian Bennett of the Aerosol Technology branch at Dugway Proving Ground. “This will certainly affect how we conduct future test work in our chambers.

“What you might notice, there are four strands for each span on that fork, that’s a natural artifact of what a tarantula delivers when he spins a tethering line. We get those four whether we like it or not, but what you can see is that we are able to apply these to the forks in a very consistent manner,” Bennett said. The forks are placed into a fixture where only the spider web is exposed, and then an aerosol cloud is sent through.

“Those impact onto the spider web and stick, and that is basically what we are using as a mimic for particles suspended in air,” Bennett added.

A pathogen on a surface, known as a fomite, has a different lifespan than one that is suspended in the air, Bennett explained. A particle suspended in the air is subjected to weather conditions, like temperature, humidity and sunlight, whereas one clinging to a surface may behave differently or unpredictably. Of course, keeping the particles suspended in the air long enough to do meaningful scientific studies is both an engineering and safety challenge.

There are two methods out there to study aerosols, according to Bennett. One is using a Goldberg Drum, which is a canister that rotates with the air at the same velocity of the settling particles, while the other is sticking the particles to spider webs. Both methods have advantages and disadvantages. The reason the Aerosol Technology branch uses micro fibers like spider webs to suspend particles is because it is simple to set up, and agile. Test fixtures can be moved from lab to lab to accommodate schedules and program priorities.

The drum requires a lot of fine-tuning to perform an experiment, and if you reach into the drum to remove a sample, the environment is affected because the concentration of the particle cloud has changed. “Plus, you have the engineering challenge of (getting) something out of a moving object,” Bennett explained. The drum is a complex and expensive apparatus, he added, noting that Dugway used to have one, but it didn’t generate reliable results.

The Aerosol Technology branch rediscovered the spider web method when a study was published comparing the drum to spider webs, and determined that there was no difference between the effects of particles suspended in the drum versus those stuck to a web. Though using the webs means more test replications to get variables down to a manageable point, Bennett said that the team at Dugway has managed to reduce variables to less than that of the drum.

“The web is so small, it has a negligent impact on the behavior of that aerosol particle, but it allows us to study that over an indefinite period,” Bennett said.

Studying how an aerosol behaves in the atmosphere will ultimately help commanders make an informed decision should a biological threat present itself, Bennett explained.

The knowledge gleaned from the spider web work at Dugway will allow military commanders and civilian leaders to determine the best way to respond to airborne biological threats, such as where to move troops to avoid an agent, whether or not to evacuate a populated area, what decontamination protocols should be applied to reclaim a contaminated area, and what antibiotics should be distributed as post-exposure therapies. 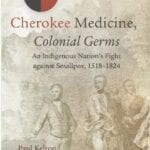