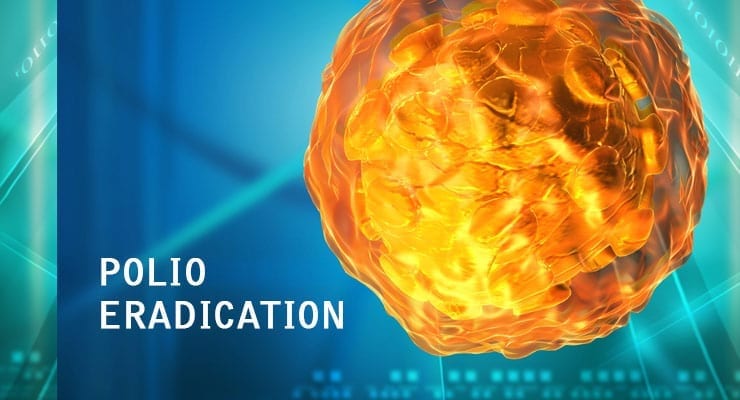 Addressing concerns about the manufacture and stockpiling of polio vaccines containing live virus, British researchers have generated a new vaccine strain that appears both effective and unable to cause disease after accidental or intentional release.

Different types of polio vaccines currently exist, but none are optimal from a safety point of view. Live attenuated (weakened) vaccine strains carry genetic mutations that prevent them from causing disease, but they can–in rare cases–revert to more dangerous virus. There are also examples in which live attenuated virus can survive in the gut of immune-compromised individuals and can be shed into the environment through their feces.

Inactivated vaccines are themselves safe, but their production at present involves growing large amounts of wild-type virus that is then killed with a chemical called formalin.

To improve safety, WHO has strongly encouraged new manufacturers to switch the source of inactivated virus from virulent wild-type strains to an attenuated strain, named after the polio vaccine pioneer Sabin.

Arguing that the attenuated Sabin strain is unstable and therefore potentially problematic, Philip Minor, from the National Institute for Biological Standards and Control and colleagues recently published data on alternative attenuated strains which they propose as a safer alternative source for inactivated vaccine.

The researchers started with a Sabin vaccine strain whose attenuation and reversion has been extensively studied and is well understood. Based on this knowledge, they modified a particular region of the viral RNA in ways that they predicted would make the resulting strains genetically stable. They then compared these new strains with both the original Sabin vaccine strain and the wild-type strain currently used in the production of inactivated vaccine.

Besides testing the genetic stability of the new strains, the researchers examined their ability to grow in tissue culture (necessary for vaccine production), their risk for causing paralysis in mice engineered to carry a human polio-virus receptor, and whether–after inactivation–they effectively immunized rats.

Finally, the researchers demonstrated that these new strains were unable to infect primates by mouth. In all these tests, the new strains behaved as predicted, that is, they are effective, suitable to mass production, and safer than the alternatives.

“We have developed new strains for IPV production with negligible risk to the human population should they escape”, the researchers conclude, and add that the attributes of the new strains “allow for safe vaccine production in the post-eradication world.”

The research was supported by NIBSC (National Institute for Biological Standards and Control) through core funding received from the UK Department of Health to fund biological standards and control.