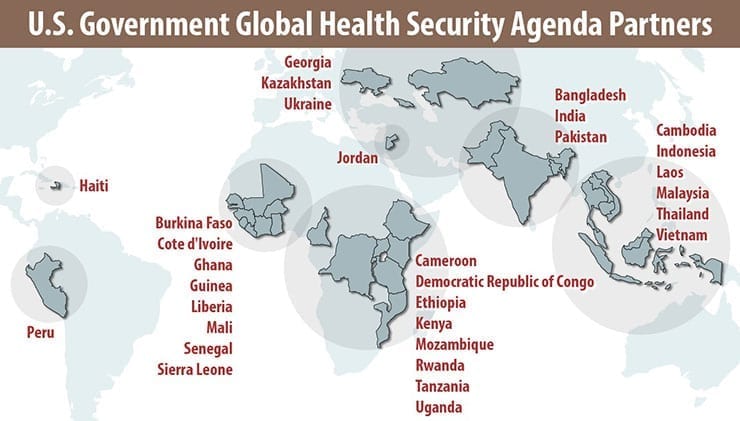 “Infectious disease does not respect international borders or government bureaucracies,” said Dr. Jonathan Woodson, assistant secretary of Defense for Health Affairs, during the recent Asia-Pacific Military Health Exchange. “Identifying and cultivating areas where our cooperation can be strengthened is something on which we all should be focusing.”

“The MHS plays an important supporting role within the United States Government to prevent, detect, and respond to endemic and emerging infectious disease threats and is highly complementary to our on-going global health biosurveillance and force health protection mission,” remarked Dr. David Smith, deputy assistant secretary of Defense for Health Readiness Policy and Oversight. “Through its force health protection mission, MHS contributes to the GHSA by conducting global infectious disease surveillance and outbreak response with partners globally, and by leveraging these surveillance activities to inform countermeasure development.

“GEIS works with 14 DoD research laboratories operating a regional network. We support endemic and emerging disease surveillance and response missions with host-nation ministries of agriculture, health and defense, as well as public and private universities and various nongovernmental organizations in order to inform combatant commands of the disease burden in their areas of operation and appropriate force health protection measures to undertake,” said Air Force Col. Carol Fisher, DHA Public Health director. “Because surveillance findings are routinely shared with other U.S. government agencies and respective host nations, these activities contribute to our national security by allowing us to aid public health prevention and treatment programs, and ability to contain disease before it crosses borders.”

GEIS has also supported five DoD overseas laboratories in developing standardized surveillance for norovirus (a virus that can cause acute gastroenteritis in humans) and enterotoxigenic Escherichia coli among U.S. military and traveler populations.

AFHSB provided subject matter expert support to U.S. Africa Command (AFRICOM) in their development of the African Partners Outbreak Response Alliance, a group of representatives from 12 countries – including GHSA participants such as Liberia, Ghana, Burkina Faso, Côte d’Ivoire and Senegal. This alliance works together to improve detection, response, and prevention of disease threats within their communities.

“We value the role that our GEIS activities play in support of GHSA,” said AFHSB Chief, Army Col. Michael Bell. “We are proud of the resources that we can bring to bear in handling endemic and emerging infectious disease threats. We recognize that these efforts are not only critical to U.S. national security interests, but also assist in keeping our forces healthy and ready to perform their duties.”