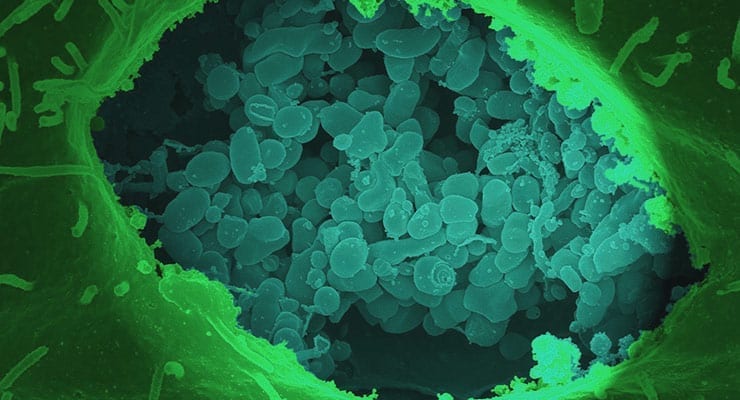 Caused by the Coxiella burnetii bacterium, Q fever is a highly infectious agent common among livestock. It has a history of being aerosolized for use in biological warfare and is considered a potential bioterrorism weapon.

Q fever is also a public health threat; a 2007-10 outbreak in the Netherlands affected thousands of people. Symptoms include high fever, nausea, severe headache and abdominal pain. It is rarely fatal.

“The current vaccine for Q fever is effective but has severe side effects that limit its widespread use,” said Felgner, an adjunct professor of medicine at UC Irvine. “It’s a high priority that this vaccine be administered to members of the armed forces. Consequently, the military is interested in developing an alternative protective vaccine that’s safer and does not cause adverse reactions.”

Felgner will use an approach he pioneered at UC Irvine to create whole proteome microarrays to discover immune response-activating antigen proteins that may be effective as a vaccine. Additionally, he’ll collaborate with Esser-Kahn, assistant professor of chemistry, whose group will develop synthetic agents that can boost and control the immune response to these proteins.

Felgner said this dual method may be applicable in creating more vaccines important to the military and general public health, adding that this is an opportunity for the Department of Defense to test these methods for their potential use against other infectious diseases.

After identifying the target proteins, Felgner will work with the U.S. Army Medical Research Institute of Infectious Diseases at Fort Detrick in Maryland on next-stage animal studies of a candidate vaccine.

The project is a successful outgrowth of the Pacific Southwest Regional Center of Excellence at UC Irvine, one of only 11 National Institutes of Health-funded research sites dedicated to countering threats from bioterrorism agents and emerging infectious diseases. UC Irvine received $85 million for this effort, which was led by Dr. Alan Barbour, professor of microbiology & molecular genetics. The federal program ended in 2015.