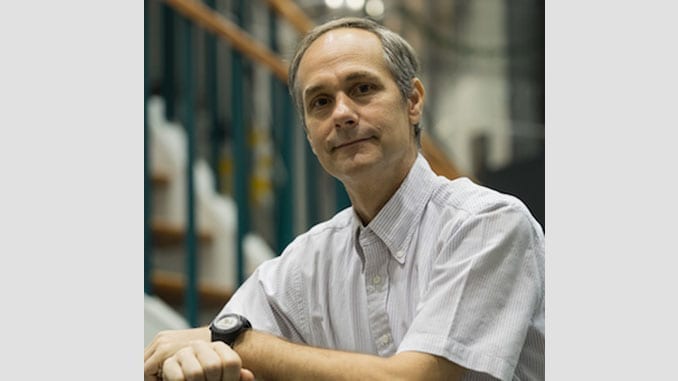 Rice University biochemist Edward Nikonowicz has been awarded a National Institutes of Health grant to study a gene regulation mechanism that may someday be exploited to help fight bacterial infections.

The $1.23 million grant will fund a deep look into a class of riboswitches found in bacteria known as the T box riboswitch. A riboswitch is a segment of ribonucleic acid that binds a specific molecule, known as the ligand, and activates or terminates expression of one or more genes.

Nikonowicz, an associate professor of biosciences, will study a T box riboswitch in Bacillus anthracis, a Gram-positive bacterial pathogen. This class of bacteria is related to streptococcus and staphylococcus, which are also pathogens and utilize the T box riboswitch for gene regulation.

“We understand the general features of the T box mechanism,” he said. “We’re going to drill down into the details of this riboswitch, but at the same time will lay the groundwork to construct kinetic models of riboswitch function in general.”

The riboswitch his lab will study is a sensor of the cell’s capacity to make proteins. The default state for the switch is “off,” to terminate gene expression. The ligand that binds the riboswitch to toggle the switch into the “on” state is a modified form of a subclass of RNA molecules known as transfer RNA.

When triggered by tRNA binding, the riboswitch activates the expression of genes necessary to make amino acids, the building blocks of proteins, and to transport them around the cell, processes essential to the health of the bacterium. “There are multiple genes that are regulated by multiple riboswitches, and each riboswitch is controlled by a specific type of tRNA molecule,” Nikonowicz said.

The efficiency of the regulatory mechanism can be influenced by genetic variations in the tRNA or the T box riboswitch itself. “There’s been a lot of effort put into developing a mechanism over the years — biochemical and now some structural — of how the switch works,” he said. “The emphasis has been on the riboswitch side. We’re going to extend that now to look at the details of the ligand, or tRNA, side of the system.”

Only in recent years have the tools become available to view such mechanisms in real time, he said. The new study will employ single molecule fluorescence resonance energy transfer, which will let Nikonowicz, aided by University of Michigan colleague Nils Walter, measure interactions between fluorescent molecules. In this case, they will add fluorescent tags to both ligand and T box molecules to directly monitor the sequence and timing of key events during the riboswitch regulatory process.

Although smFRET has been used to characterize the three-dimensional architecture of some riboswitches, direct observation of ligand binding has been elusive, Nikonowicz said. “If you try to attach a fluorophorescent tag to a small ligand like biotin, you no longer have a true ligand. The tRNA ligands are big enough that adding a fluorescent tag doesn’t change their essential character,” he said.

The project’s specific goals are to identify the structural details of tRNA-riboswitch complexes, to build a kinetic model of the mechanism that allows researchers to test variables, and to determine in vivo effects of variations in the ligand on T box riboswitch efficiency and bacterial fitness.

A detailed kinetic model of T box regulation could serve as a model for many other riboswitches, Nikonowicz said. That could allow for the development of drugs that inhibit the switches’ function and could also be used to design riboswitches into synthetic biological circuits.

“What we’re looking at, in the practical realm of antibiotics, is to trick the cells into thinking they always have a full store of protein building blocks even as they deplete their stockpile,” he said. “Compounds that turn the switch off and keep it in the off position effectively shut down the expression of amino acid biosynthesis and transport genes. As the cell’s capacity to make proteins is depleted, the bacteria will become weaker, giving the host immune system a better chance to fight infection.”