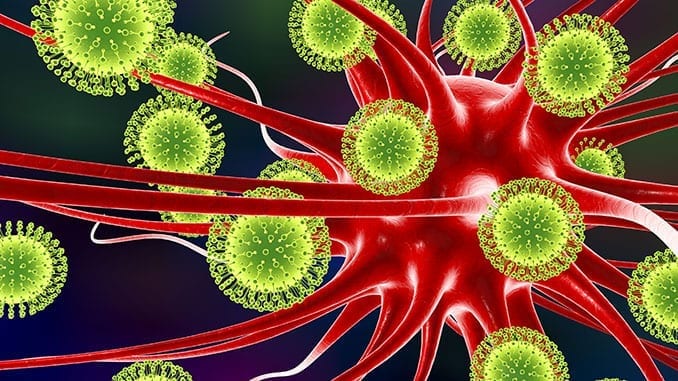 University of California San Francisco (UCSF) researchers have determined that azithromycin, a common antibiotic regarded as safe for use during pregnancy, can prevent the virus from infecting certain fetal brain tissue cells that are targeted by the Zika virus.

In a recently published study, the UCSF researchers determined that the Zika virus preferentially infects brain cells with an abundance of a protein called AXL, which spans the outer cell membrane of several cell types and serves as a gateway for the invading virus.

The fetal brain cells that incorporate this protein and that are vulnerable to the virus include neural stem cells and progenitor cells that spin off other types of brain cells and that play an especially crucial role in early brain growth and development.

Other cells with AXL that were infected by the Zika virus included microglia, which are the brain’s immune cells, and astrocytes, a fully developed and specialized type of brain cell that serves to support the signal-conducting neurons. The UCSF researchers found that neurons, which lack AXL, were not easily infected, in contrast to what had been observed in mice previously used to study Zika infection.

The scientists then used UCSF’s Small Molecule Discovery Center’s collection to screen 2,177 FDA-approved drugs for their ability to block Zika infection of brain cells cultured in the lab, and identified several that did, including azithromycin, a widely used antibiotic.

Rough estimates indicate that between 1 percent and 13 percent of women infected during early pregnancy by the Zika virus, which is transmitted by the tropical mosquito Aedes aegypti, are giving birth to infants with microcephaly, a condition that is characterized by an undersized head and brain damage.

There currently is no treatment to prevent the virus from harming the fetus, and the biological mechanism through which microcephaly arises as a result of infection has been a mystery.

The collaborative research was led by Joseph DeRisi, PhD, chair of the UCSF Department of Biochemistry and Biophysics, and Arnold Kriegstein, MD, PhD, Director of the Eli and Edythe Broad Center of Regeneration Medicine and Stem Cell Research at UCSF. Graduate student Hanna Retallack and postdoctoral fellow Elizabeth Di Lullo, PhD, conducted many of the experiments in the DeRisi and Kriegstein labs and are the first authors of the study.

DeRisi is consulting with clinical collaborators in Brazil with the hope of launching a clinical trial to see if azithromycin will lower the risk of fetal harm in pregnant women infected with Zika.

“The development of a vaccine to prevent Zika virus infection and mosquito abatement are important for long-term disease control, but we also want to investigate how the virus infects human tissues and identify treatments that can be used as soon as possible to counter this emerging global disease threat,” he said.

DeRisi, who also is co-president of the new Chan Zuckerberg Biohub, has long studied emergent pathogenic viruses, often making new discoveries using genetic sleuthing strategies. Kriegstein, professor of neurology and the John Bowes Distinguished Professor in Stem Cell and Tissue Biology, is at the forefront of research on how the brain develops.

Researchers in the Kriegstein lab earlier became interested in studying Zika virus in the brain after reading that the virus could infect skin cells containing the AXL protein. They already had extensively tracked gene activity and protein production in brain cell types during development, in work funded by the National Institutes of Health (NIH) through the 2014 Brain Research through Advancing Innovative Neurotechnologies Initiative, and had determined that AXL was abundant in neural stem cells and other progenitor cells, in brain capillaries, in astrocytes, and in microglia.

Their new knowledge of patterns of normal gene expression in cells during brain growth also deepened their interest in microcephaly, which apart from Zika infection, can arise when genetic programs go awry.

When the researchers blocked or eliminated AXL in laboratory grown types of cells found in the fetal brain, Zika was inhibited from infecting the cells.

The pattern of viral infection the researchers observed in fetal brain tissue in the lab was consistent with the diminished growth of the brain and head seen in infants born with microcephaly linked to Zika, according to Kriegstein.

“Zika associated microcephaly differs from cases caused by genetic abnormalities,” he said. “As with genetic forms, the brain does not grow or develop normally. But in addition, the brain actually shrinks due to tissue destruction as a result of the infection. It may be that infections earlier in pregnancy disproportionately affect neural stem cells and later on strongly affect more mature cells, including the growing astrocyte cell population.”

Thousands of cases of microcephaly, concentrated in Brazil and Latin America, have been attributed to infection with Zika virus. Aedes aegypti today ranges northward to the southernmost United States, but the vast majority of U.S. Zika cases have resulted from travellers being bitten by mosquitos abroad. The virus also can be transmitted sexually. As of November 10, 2016, the U.S. Centers for Disease Control and Prevention had reported 26 cases of Zika-associated birth defects among women giving birth in the continental United States and five pregnancy losses as a result of birth defects due to Zika infection.