The U.S. Food and Drug Administration approval in Sep 2018 of the drug Seizalam® (midazolam injection) as an anti-seizure medication, provided the nation with a medical countermeasure (MCM) for people exposed to chemicals that cause prolonged seizures, whether those situations are in combat, domestic accidents or an intentional attack.

Developed by Meridian Medical Technologies, Midazolam originally was approved by FDA for use as a sedative. This recent FDA approval of intramuscular midazolam (tradename Seizalam) for status epilepticus expands the possible uses of the drug.

Status epilepticus involves a seizure that lasts longer than five minutes or multiple seizures within five minutes, without returning to a normal level of consciousness between seizures. Status epilepticus can lead to permanent brain damage or death. Nerve agents and organophosphorus pesticides as well as other conditions can cause these types of seizures.

Because it is available in multi-use vials, administration of Seizalam is easier in emergencies involving a large number of exposures.

Health and Human Services (HHS) and Department of Defense offices worked closely with the company to earn this approval. Following early research by the U.S. Army Medical Research Institute of Chemical Defense and the National Institutes of Health, the U.S. Army Joint Project Management Office for Medical Countermeasure Systems (JPM-MCS) and the Biomedical Advanced Research and Development Authority (BARDA) worked closely with Meridian Medical Technologies, a Pfizer company, to develop the drug as an anticonvulsant. 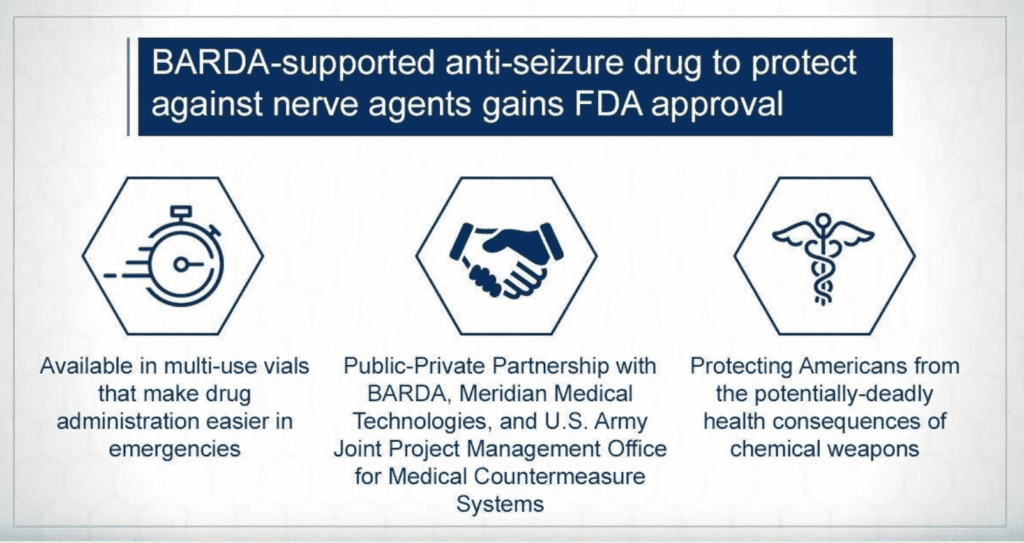 The JPM-MCS is capitalizing further on the RAMPART study to finish development and approval of its midazolam autoinjector medical countermeasure. This type of autoinjector device would make the drug easier to use on the battlefield, providing more immediate relief to U.S. and allied troops. The autoinjector would also function as part of a suite of medical products that serve as first-line-of-defense medical treatments for U.S. troops against chemical warfare agents and for emergency responders in the United States.

The JPM-MCS has worked closely with Meridian over the last 10 years to develop the drug-device combination product. The recent FDA approval may help the company, and the Army, to accelerate the process to apply for full FDA approval of the midazolam autoinjector in the coming years. By leveraging the RAMPART study, JPM-MCS expects to save approximately $30 million and reduce the time to apply for FDA approval by at least three years.

Now that FDA has approved the drug for use in treating seizures, BARDA has purchased 675,000 multi-dose vials for the Strategic National Stockpile, and DOD plans to field the vialed midazolam for military hospitals in the coming months. If development is successful and FDA clears the device for use with midazolam, BARDA will be able to purchase the midazolam autoinjectors for the Strategic National Stockpile to replace the anti-seizure drug currently in the stockpile’s CHEMPACKs.