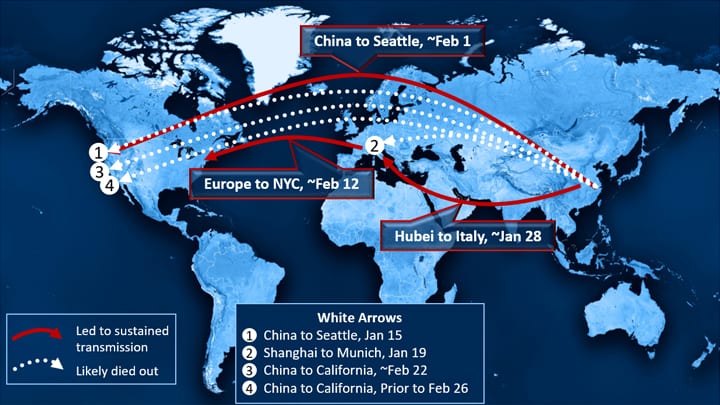 It was nearly 10 months ago on January 15 that a traveler returned home to the Seattle area after visiting family in Wuhan, China. A few days later, he started feeling poorly and became the first laboratory-confirmed case of coronavirus disease 2019 (COVID-19) in the United States. The rest is history.

However, new evidence published in the journal Science suggests that this first COVID-19 case on the West Coast didn’t snowball into the current epidemic. Instead, while public health officials in Washington state worked tirelessly and ultimately succeeded in containing its sustained transmission, the novel coronavirus slipped in via another individual about two weeks later, around the beginning of February.

COVID-19 is caused by the novel coronavirus SARS-CoV-2. Last winter, researchers sequenced the genetic material from the SARS-CoV-2 that was isolated from the returned Seattle traveler. While contact tracing didn’t identify any spread of this particular virus, dubbed WA1, questions arose when a genetically similar virus known as WA2 turned up in Washington state. Not long after, WA2-like viruses then appeared in California; British Columbia, Canada; and eventually 3,000 miles away in Connecticut. By mid-March, this WA2 cluster accounted for the vast majority—85 percent—of the cases in Washington state.

But was it possible that the WA2 cluster is a direct descendent of WA1? Did WA1 cause an unnoticed chain of transmission over several weeks, making the Seattle the epicenter of the outbreak in North America?

To answer those questions and others from around the globe, Michael Worobey, University of Arizona, Tucson, and his colleagues drew on multiple sources of information. These included data peretaining to viral genomes, airline passenger flow, and disease incidence in China’s Hubei Province and other places that likely would have influenced the probability that infected travelers were moving the virus around the globe. Based on all the evidence, the researchers simulated the outbreak more than 1,000 times on a computer over a two-month period, beginning on January 15 and assuming the epidemic started with WA1. And, not once did any of their simulated outbreaks match up to the actual genome data.

Those findings suggest to the researchers that the idea WA1 is responsible for all that came later is exceedingly unlikely. The evidence and simulations also appear to rule out the notion that the earliest cases in Washington state entered the United States by way of Canada. A deep dive into the data suggests a more likely scenario is that the outbreak was set off by one or more introductions of genetically similar viruses from China to the West Coast. Though we still don’t know exactly where, the Seattle area is the most likely site given the large number of WA2-like viruses sampled there.

Worobey’s team conducted a second analysis of the outbreak in Europe, and those simulations paint a similar picture to the one in the United States. The researchers conclude that the first known case of COVID-19 in Europe, arriving in Germany on January 20, led to a relatively small number of cases before being stamped out by aggressive testing and contact tracing efforts. That small, early outbreak probably didn’t spark the later one in Northern Italy, which eventually spread to the United States.

Their findings also show that the chain of transmission from China to Italy to New York City sparked outbreaks on the East Coast slightly later in February than those that spread from China directly to Washington state. It confirms that the Seattle outbreak was indeed the first, predating others on the East Coast and in California.

The findings in this report are yet another reminder of the value of integrating genome surveillance together with other sources of data when it comes to understanding, tracking, and containing the spread of COVID-19. They also show that swift and decisive public health measures to contain the virus worked when SARS-CoV-2 first entered the United States and Europe, and can now serve as models of containment.

Since the suffering and death from this pandemic continues in the United States, this historical reconstruction from early in 2020 is one more reminder that all of us have the opportunity and the responsibility to try to limit further spread. Wear your mask when you are outside the home; maintain physical distancing; wash your hands frequently; and don’t congregate indoors, where the risks are greatest. These lessons will enable us to better anticipate, prevent, and respond to additional outbreaks of COVID-19 or any other novel viruses that may arise in the future.

This article first appeared on the NIH Director’s Blog 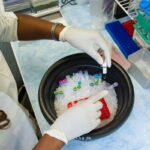 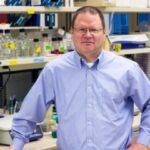