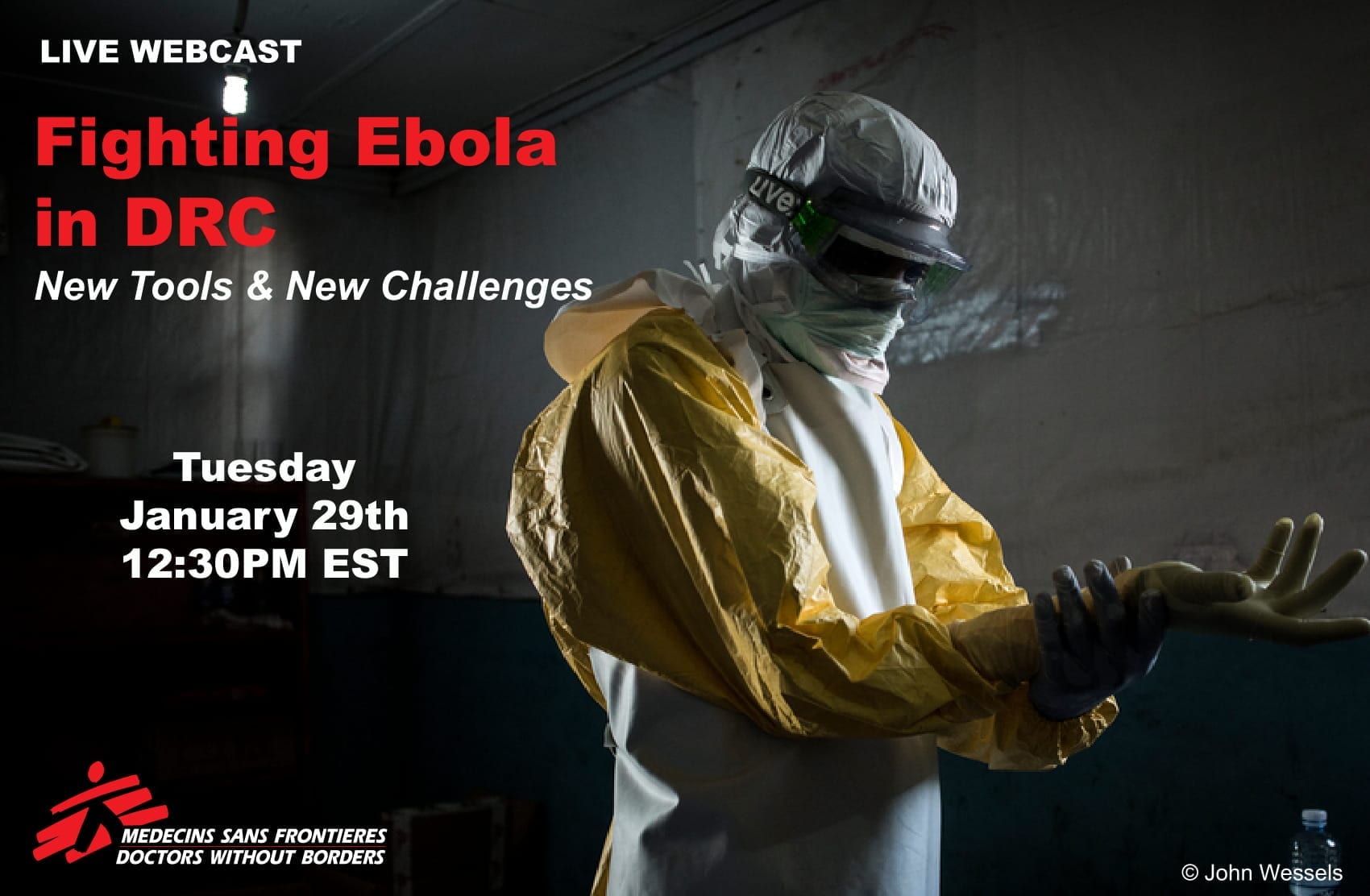 Join Doctors Without Borders for a live webcast panel discussion on January 29 from 12:30 PM – 2:00 PM EST on efforts to contain the current Ebola epidemic in Democratic Republic of Congo (DRC).

MSF teams are responding to the second largest Ebola outbreak ever recorded, trying to halt the spread of this highly infectious, deadly disease. The epicenter of the outbreak is in a conflict area in North Kivu province, making a rapid response difficult.

Panelists will explore the evolving medical approaches to fighting the Ebola virus, the initiation of a randomized controlled trial testing treatment options, and the unique ethical and logistical considerations this outbreak presents.

At the time of the event, tune in to the webcast here.

Karin Huster, MSF Project Coordinator, earned a BS in Nursing from the University of Washington in 2005 and her Master in Public Health degree from UW’s department of global health in 2013. After nine years working as a nurse in the intensive care unit of a large trauma center, Karin now focuses on responding to humanitarian emergencies, either in a clinical capacity, as a field epidemiologist, or field coordinator. She has also worked as an advisor to the emergency response branch of USAID. Most recently, Karin returned from DRC where she helped launch MSF’s response to the Ebola outbreak and later returned to manage an MSF transit center for people with suspected cases of Ebola. In 2014, she worked as part of the response in each of the three West African countries affected by the largest Ebola outbreak in history. She has also worked in Iraq, Bangladesh, Nigeria, Haiti, and Lebanon.

Dr. Brian D’Cruz, MSF Physician, has worked with MSF since 2011, and recently returned from MSF’s Ebola intervention in Beni, DRC. In 2014–2015, Brian participated in MSF’s response to the West Africa Ebola outbreak in Guinea. He has also worked at MSF projects in Burundi, Central African Republic, Syria, and Chad.

Dr. Tomas Jensen, MSF Tropical Medicine Advisor, is an infectious diseases physician currently based in New York as an advisor on tropical medicine and epidemics for MSF. He started working with MSF in 2006 as a field doctor and has worked in several countries including South Sudan, Ethiopia, Zimbabwe, South Africa, and Zambia. After finishing medical school in Denmark, Tomas completed infectious diseases specialist training in Australia and a master’s degree in epidemiology with the London School of Hygiene and Tropical Medicine.

The discussion will be moderated by Sandra Murillo, MSF-USA Media Relations Director.