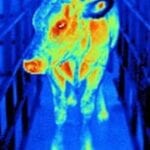 The budget proposal sent by the Obama administration to Congress on Wednesday includes $714 million for construction of the new National Bio and Agro-Defense (NBAF) animal disease laboratory at Kansas State University.

Inclusion in the President’s budget is seen as a strong signal of momentum for the project, coupled with a recent Department of Homeland Security announcement for a $40 million contract to begin construction of a central utilities plant for NBAF.

NBAF funding was left out of White House’s budget proposal altogether last year, while awaiting an updated NBAF Risk Assessment and renewed analysis of the scale of the project in light of fiscal constraints and escalating cost estimates.

A panel from the National Academy of Sciences was commissioned last summer to re-examine mission requirements and facility plans, ultimately rejecting the option of keeping the mission at PIADC.

A core component of the nation’s agro-defense research is the development of improved countermeasures for foot-and-mouth disease (FMD) virus, one of the world’s most contagious animal diseases. Specialized high containment facilities planned for NBAF are seen as an strong improvement on the aging Plum Island facilities.

Sen. Pat Roberts (R-Kansas) says the proposal will require additional financial commitments from Kansas, which will be worked out by Gov. Sam Brownback and legislators.

Kansas senators said they’re encouraged the budget proposal includes funding for a biodefense lab in Kansas, but they acknowledge there is still much work to do in Congress to make sure the money comes through.