Point of Care Device for Cancer Adapted for Biothreats 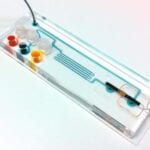 Two papers appearing in the Nature Communications and Nature Nanotechnology describe portable devices that
combine microfluidic technology with nuclear magnetic resonance (NMR) to not only diagnose these important infections but also determine the presence of antibiotic-resistant bacterial strains.

“Rapidly identifying the pathogen responsible for an infection and testing for the presence of resistance are critical not only for diagnosis but also for deciding which antibiotics to give a patient,” says Ralph Weissleder, MD, PhD, director of the MGH Center for Systems Biology (CSB) and co-senior author of both papers. “These described methods allow us to do this in two to three hours, a vast improvement over standard culturing practice, which can take as much as two weeks to provide a diagnosis.”

Investigators at the MGH CSB previously developed portable devices capable of detecting cancer biomarkers in the blood or in very small tissue samples. Target cells or molecules are first labeled with magnetic nanoparticles, and the sample is then passed through a micro NMR system capable of detecting and quantifying levels of the target. But initial efforts to adapt the system to bacterial diagnosis had trouble finding antibodies – the detection method used in the earlier studies – that would accurately detect the specific bacteria. Instead the team switched to targeting specific nucleic acid sequences.

The system described in the Nature Communications paper, published on April 23, detects DNA from the tuberculosis bacteria in small sputum samples. After DNA is extracted from the sample, any of the target sequence that is present is amplified using a standard procedure, then captured by polymer beads containing complementary nucleic acid sequences and labeled with magnetic nanoparticles with sequences that bind to other portions of the target DNA. The miniature NMR coil incorporated into the device – which is about the size of a standard laboratory slide – detects any TB bacterial DNA present in the sample.

Tests of the device on samples from patients known to have TB and from healthy controls identified all positive samples with no false positives in less than three hours. Existing diagnostic procedures can take weeks to provide results and can miss up to 40 percent of infected patients. Results were even stronger for patients infected with both TB and HIV – probably because infection with both pathogens leads to high levels of the TB bacteria – and specialized nucleic acid probes developed by the research team were able to distinguish treatment-resistant bacterial strains.

The Nature Nanotechnology paper, being issued online this week, describes a similar system using ribosomal RNA (rRNA) – already in use as a bacterial biomarker – as a target for nanoparticle labeling. The investigators developed both a universal nucleic acid probe that detects an rRNA region common to many bacterial species and a set of probes that target sequences specific to 13 clinically important pathogens, including Streptococcus pneumoniae, Escherichia coli and methicillin-resistant Staphylococcus aureus (MRSA).

The device was sensitive enough to detect as few as one or two bacteria in a 10 ml blood sample and to accurately estimate bacterial load. Testing the system on blood samples from patients with known infections accurately identified the particular bacterial species in less than two hours and also detected two species that had not been identified with standard culture techniques.

While both systems require further development to incorporate all steps into sealed, stand-alone devices, reducing the risk of contamination, Weissleder notes that the small size and ease of use of these devices make them ideal for use in developing countries. “The magnetic interactions that pathogen detection is based on are very reliable, regardless of the quality of the sample, meaning that extensive purification – which would be difficult in resource-limited setting – is not necessary. The ability to diagnose TB in a matter of hours could allow testing and treatment decisions within the same clinic visit, which can be crucial to controlling the spread of TB in developing countries.”

Image: On this 2.5- by 7.5-cm cartridge, DNA extracted from sputum samples is amplified in the chambers on the left. TB-specific sequences are magnetically labeled in the microfluidic mixing channels in the center and detected by passage through the micro-NMR coil on the right. Image Credit: Center for Systems Biology, Massachusetts General Hospital

Read more: A magneto-DNA nanoparticle system for detection and phenotyping of bacteria