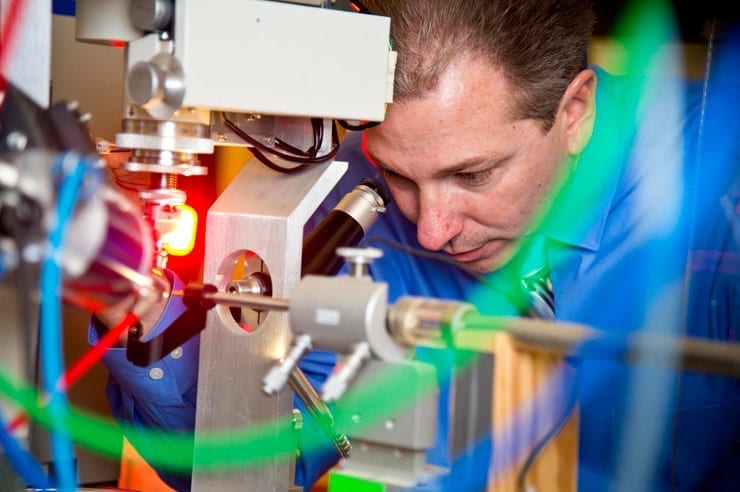 A Purdue University-led research team has figured out how to disable a part of the SARS virus responsible for hiding it from the immune system; a critical step in developing a vaccine against the deadly disease.

The findings also have potential applications in the creation of vaccines against other coronaviruses, including a MERS vaccine, said Andrew Mesecar, who led the research.

“This is a first step toward creating a weakened and safe virus for use in an attenuated live vaccine,” said Mesecar, Purdue’s Walther Professor of Cancer Structural Biology and professor of biological sciences and chemistry. “This also could serve as a molecular roadmap for performing similar studies on other coronaviruses, like MERS, because this enzyme appears to be common to all viruses within this family.”

Mesecar also is a part of a research team studying and creating potential treatment compounds for the Middle East respiratory syndrome coronavirus, or MERS, that recently arrived in the United States. There is currently no treatment or vaccine for the virus, which has an estimated fatality rate of 30 percent, according to the Centers for Disease Control and Prevention.

Because MERS and SARS are related, insight into one could provide a shortcut to finding a treatment or developing a vaccine for the other.

Mesecar and his team captured the molecular structure of a key SARS enzyme, papain-like protease, and revealed how it strips a host cell of the proteins ubiquitin and ISG15, which are involved in triggering an immune response.

“With most viruses, when a cell is infected it sends out an alarm triggering an immune response that fights the infection, but successful viruses are able to trick the immune system,” Mesecar said. “By clipping off these two proteins, SARS short circuits the host cell’s signaling pathways and prevents it from alerting the immune system to its presence. By removing these proteins, the enzyme serves as a biological cloaking system for the SARS virus that allows it to live and replicate undetected.”

The disruption in its natural signaling pathways also causes an infected cell to miscommunicate with the cells around it, which leads to a response that eventually kills those cells, he said.

“Some treatments prevent a virus from replicating and stop further infection, but that doesn’t necessarily prevent a harmful reaction to the virus,” Mesecar said. “Sometimes it is the confusion in cellular communication that makes a virus lethal.”

The outbreak of SARS, severe acute respiratory syndrome, in 2003 led to hundreds of deaths and thousands of illnesses, and there is currently no treatment. The virus can be transmitted through coughing or sneezing, and the infection can quickly spread from person to person, according to the CDC. SARS spread through two dozen countries over a period of a few months before it was contained. A total of 8,098 people worldwide became ill and 774 died. There have been no reported cases of SARS since 2004.

In 2012 the National Select Agent Registry Program declared SARS virus a select agent, meaning it is considered to have the potential to pose a severe threat to public health and safety.

In addition to hiding the virus from the immune system, the SARS papain-like protease, or PLpro, enzyme also is responsible for snipping the viral polyprotein into individual proteins that are essential for viral replication. While some treatments are designed to prevent viral replication, researchers working on a vaccine must retain this function, he said.

“The goal in engineering a SARS virus that could be used as a vaccine is to create one that replicates in cells but is unable to fend off the body’s immune response,” Mesecar said. “We want enough viral particles to be generated to properly prime the immune sytem to fight off a true infection, but without the virus being able to cause illness in the vaccinated individual.”

Mesecar and his team focused on uncovering parts of the SARS PLpro enzyme that would be involved in thwarting the immune response, but which could be altered without affecting viral replication, he said.

The team used X-ray crystallography to solve the three-dimensional structure of the SARS PLpro enzyme in complex with ubiquitin. This enabled them to see how it interatced with the protein and which amino acids are involved in linking the two together. They then used computer models and simulations to determine which amino acids are likely involved in binding ISG15. The researchers mutated the amino acids identified so that the SARS PLpro enzyme could no longer interact with the host cell proteins. The team then tested the mutatant enzyme to confirm that it could still perform its role in viral replication.

Mesecar and his team are currently applying their findings to the MERS virus. They have shown that the MERS virus PLpro enzyme also removes ISG15 and ubiquitin from host cell proteins, and were able to crystallize the MERS Plpro enzyme in complex with ubiquitn and ISG15, he said.

Read more on their research at PLOS Pathogens: Structural Basis for the Ubiquitin-Linkage Specificity and deISGylating Activity of SARS-CoV Papain-Like Protease. 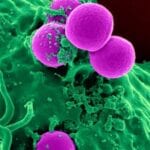