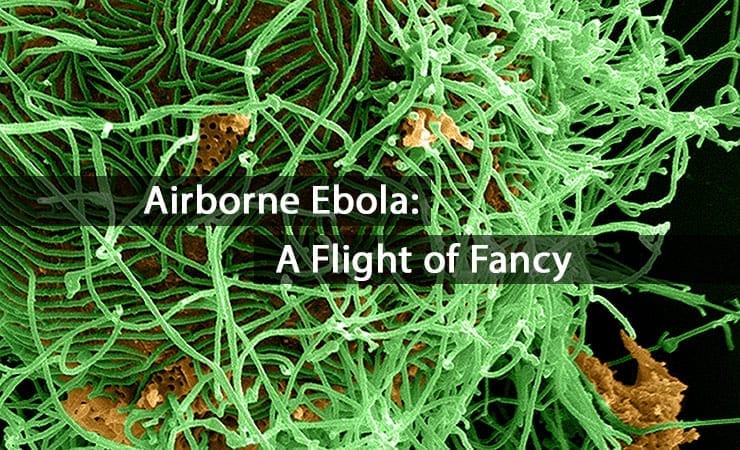 Like the cockroach after a nuclear blast, the airborne ebolavirus debate just won’t die.

Many mentions in the media in the last few weeks, including the NYT and CIDRAP articles have further fueled the debate with references to a 2012 Canadian pig study[1] and the Hot Zone, the well-known dramatized account of the Reston Virginia Ebola epizootic. And regardless of how eloquently Ebola experts refute the claims with solid evidence, it continues to smolder in all forms of internet publications and social media.

Some argue vehemently that the Hot Zone clearly tells us that Ebola Reston was airborne, and that the 2012 pig study clearly showed that transmission of Ebola Zaire from pigs to monkeys was airborne as well.

I would argue that we need to take a closer look at what the Hot Zone and that pig study actually tell us.

The Hot Zone is a dramatized account of an Ebola Reston outbreak in a monkey quarantine facility. This is not a scientific study. It is a gripping read and does a beautiful job of letting those of us who weren’t there experience the intensity of a truly frightening situation. I loved the Hot Zone and highly recommend it. But it’s not a peer-reviewed study, it’s a dramatization.

However, there are scientific studies published on the Reston incident, one of which discusses the transmission routes that were suspected.[2] In it they conclude that “aerosols or droplets” were likely involved in transmission, but that they could not rule out other routes. It’s important to note here that aerosol and droplet transmission, do not airborne transmission make. Inhaling droplets in close proximity is not what “airborne” means, an issue that’s been covered by me and others in detail.

The 2012 pig study is an excellent peer-reviewed scientific study, but if you read it closely you will see that it doesn’t directly show that Ebola Zaire was transmitted from pigs to monkeys via an airborne route, and it certainly doesn’t tell us anything about human to human transmission.

To really appreciate what this study shows, we have to understand that there are significant differences between the diseases caused by Ebola Zaire in monkeys compared to pigs. Ebola Zaire infection in monkeys causes severe systemic infection and immune dysregulation leading to hemorrhagic fever with 90% fatality. In pigs the disease caused by Ebola Zaire is strikingly different. Infection is predominantly limited to the respiratory tract and the pigs get sick but recover. In fact this is pointed out in the study,

This phenomenon can be linked to different clinical picture in the two animal species: respiratory distress in pigs (severe in a specific age group) versus systemic disease with no major respiratory signs in NHPs.

This clearly indicates that virus dissemination and pathogenesis in monkeys is very different from that in pigs. It also tells us that pigs will produce far more copious infectious fluids from their respiratory tract than will a monkey. And this brings us to a significant flaw in this model which the authors clearly communicate in the paper,

The design and size of the animal cubicle did not allow (us) to distinguish whether the transmission was by aerosol, small or large droplets in the air, or droplets created during floor cleaning which landed inside NHP cages (fomites).

This means they couldn’t accurately determine how the transmission occurred from the pigs to the monkeys. Another point the authors make, that shouldn’t be ignored, is this:

Finally, during a 2012 interview discussing the paper, Gary Kobinger, the PI on the study had this to say:

What we suspect is happening is large droplets – they can stay in the air, but not long, they don’t go far.

And the most important study regarding this issue, that I’ve not yet seen one article reference, was a study similar to that done in 2012 but with only monkeys. This study was again by Kobinger’s group and published in July of this year.[3] This is what they found:

No transmission of virus to neighbouring NHPs was observed suggesting limited containment protocols are sufficient for multi-viral CL4 experiments within one room. The results support the concept that Ebola virus infection is self-contained in NHPs infected intramuscularly, at least in the present experimental conditions, and is not transmitted to naïve NHPs via an airborne route.

So they did the experiment again, this time with only monkeys and found that without direct contact, infectious monkeys did not transmit virus to other monkeys that were in the same room. The virus was not airborne.

Now, I’d like to draw your attention to the wording of that last quoted paragraph. There are clear caveats written there, as there should be for any study in a model system. They indicate that the data allow us to draw conclusions that are applicable only to the animals in their study, under their experimental conditions, no more, no less. And while some might be quick to point this out as a limitation to this study, it behooves us to remember that each of the studies on Ebola transmission carry the same caveats.

Contributing author Heather Lander has a Ph.D. in Experimental Pathology with a concentration in arenavirus pathogenesis. She is the editor of Pathogen Perspectives, a blog providing insights on highly pathogenic biothreats. You can also reach her on Twitter @PathogenPhD or by email. 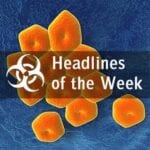 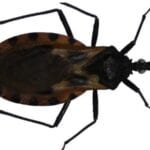