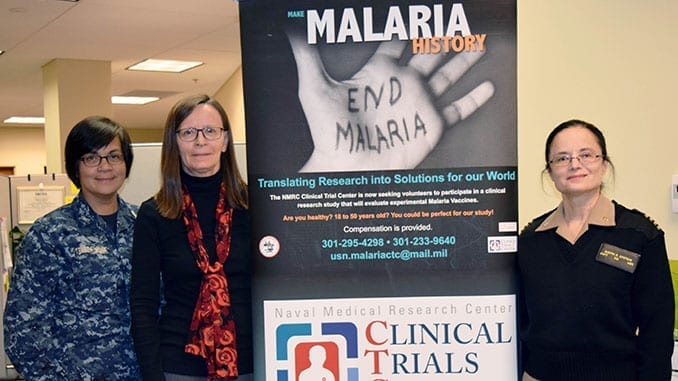 After extensive research and development efforts, the Naval Medical Research Center (NMRC) team at the NMRC Clinical Trials Center (CTC), located on the campus of the Walter Reed National Military Medical Center in Bethesda, Maryland, will test the effectiveness of an investigational malaria vaccine, with the help of human subjects, February 2-3, 2017.

While there are personal protective measures that can be taken to help combat the threat of malaria, there is currently no licensed malaria vaccine.

“In 2015, nearly half of the countries in the world had on-going malaria transmission. This is a significant disease threat to deployed troops, with the risk varying year-to-year, depending on the location of combat, humanitarian, and peacekeeping missions. Most military personnel from developed countries are not immune to malaria, and suffer high rates of morbidity and mortality when infected,” said Eileen Villasante, PhD, Head, Malaria Department, NMRC.

“There are malaria vaccines being developed and tested all over the world, but creating a vaccine that is 90 to 100 percent effective, Federal Drug Administration (FDA) approved, long lasting, safe and tolerable, that protects against all strains of malaria is a major challenge,” said Capt. Judith Epstein, Clinical Director, Malaria Department, NMRC.

“There are three stages in the lifecycle of vaccine development and research,” explained Epstein. The first stage is discovery research, where researchers identify antigen targets and vaccine platforms, optimize antigen potency, and characterize mechanisms of protective immunity.

The second stage, known as the concept development/pre-clinical stage, is where researchers evaluate candidate vaccines in laboratory models, as well as manufacture and test vaccine candidates for progression to clinical development.

The third stage of the research strategy is to test candidate vaccines in Phase 1 and 2 clinical trials.  Controlled human malaria infection (CHMI) is an important part of these clinical research activities.

“The CHMI part of the research strategy is really essential to the work we are doing,” said Capt. Nimfa Teneza-Mora, Director, Clinical Trials Center, NMRC.

On the day of the CHMI, subjects go through a regular check-up, have blood drawn, and are walked through the process of the challenge. While a daunting thought to some, the actual process for becoming infected as part of the challenge is no worse than being outside on a hot and humid summer day with no mosquito repellent.

“The subjects are brought in to the Walter Reed Army Institute of Research (WRAIR) mosquito insectary, where there is a container with five malaria-infected Anopheles stephensi female mosquitoes. The subject will put his or her forearm on top of the container for approximately five minutes, where the mosquitoes will bite and feast on his or her blood. After the biting session, the mosquitoes will be dissected. This is where the insectary technician will look for sporozoites in the mosquitoes’ salivary glands.  After being bitten by 5 infected mosquitoes, the subject remains under observation for thirty minutes,” said Teneza-Mora.

While the CTC is currently preparing to conduct the CHMI for one malaria vaccine candidate, there are other vaccines in the research and development phase, as well. The first immunization for a different malaria vaccine candidate is set to take place in the second quarter of 2017. The CTC will be actively recruiting volunteers in the New Year for that upcoming trial.

Malaria is a serious and sometimes fatal disease caused by a parasite spread by female mosquitoes, when they feed on humans. According to the Centers for Disease Control and Prevention (CDC), “people who get malaria are typically very sick with high fevers, shaking chills, and flu-like illness. Although malaria can be a deadly disease, illness and death from malaria can usually be prevented.”

“Becoming a clinical trial volunteer really has an impact on the work that we do. Malaria has had a big impact on the U.S. military since the Revolutionary War, and development of a malaria vaccine has been in the works for decades,” said Villasante. With the help of clinical trial volunteers, and non-stop dedicated research and development, the thought of an effective malaria vaccine isn’t so far-fetched.

Article adapted from original by NMRC Public Affairs. Edited for context and format by Global Biodefense. 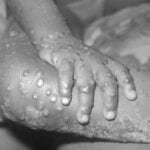 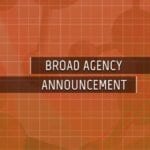