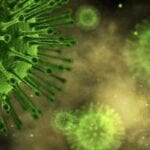 Researchers from the Imperial College London and the U.S. Centers for Disease Control and Prevention have identified a simple new method to better assess the risks posed by emerging zoonotic viruses.

Published in PLOS Medicine this week, the research shows that the new tool can produce transmissibility estimates for swine flu (the H3N2v-M virus), allowing researchers to better evaluate the possible pandemic threat posed by this virus.

The team developed a mathematical model of disease transmission, which only requires data from routine surveillance and standard case investigations. They showed that the pandemic potential of a zoonotic virus could be estimated simply from the proportion of cases infected by the natural reservoir. The authors then applied their new approach to assess the human-to-human transmissibility of H1N1v, H1N2v and H3N2v viruses (in particular that of the H3N2v-M virus) from US surveillance data for the period December 2005 to December 2011 and Nipah virus in Malaysia and Bangladesh, as well as to a non-zoonotic pathogen Vibrio cholerae in the Dominican Republic.

Read more at PLoS Medicine: Using Routine Surveillance Data to Estimate the Epidemic Potential of Emerging Zoonoses: Application to the Emergence of US Swine Origin Influenza A H3N2v Virus.